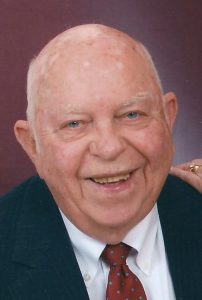 Franklyn Arnold Widergren, 86, passed away on Thursday, August 18th, 2016. His brief stay at James River Care and Rehabilitation center in Springfield, Missouri came to an end as a result of congestive heart disease.
Franklyn, or as we so fondly remembered as Frank , was born on March 1, 1930 in Newman Grove, Nebraska. In his early years, Frank helped his father at the family-owned grocery store. After graduating from Hastings College in 1952 with a Bachelors’ Degree in Business, he pursued a career at Proctor and Gamble. Frank also served 12 years in the National Guard. On June 23rd, 1953 he married Meredith Krueckeberg, the love of his life.
Frank was a successful sales manager with Tee-Pak Inc. Their first home was in Hastings Nebraska before moving to Omaha Nebraska, Toronto Canada and Wheaton Illinois. They moved to Lakeview Arkansas to start their retirement and lastly moved to Springfield. After his retirement in 1990, his life became full with what he loved most: fishing, hunting, antiquing, and most of all time with family.
He was preceded in death by his parents, brothers Bob and Ken, sister, Jeanne Marie, and beloved daughter Kelli. Frank is survived by his wife, Meredith, daughter Lynne and husband Scott, son John and wife Judy, six grandchildren: Matt, Missy, Daniel, David, James, and Natalie, and two great grandchildren: Rachel and Sean.
He is remembered by his funny jokes, card game victories, and love for the neighborhood dogs.
His memorial service will take place on Wednesday, August 24, 2016 at Redeemer Lutheran Church at 10:30 a.m. In lieu of flowers, the family requests memorial contributions be made to Springfield Lutheran School, 2852 South Dayton, Springfield, MO 65807