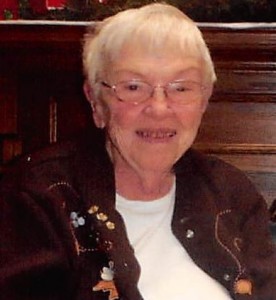 Freeda Lawanda Russell, age 94, of Springfield, MO, passed away Thursday, September 3, 2015 at Magnolia Square. She was born September 15, 1920, in Polk County, MO, to John and Berta (McMichael) Faulkner. On February 18, 1938, she married Ralph Edward Russell, who preceded her in death in 1998, after 60 years of marriage. She was an excelent cook and homemaker. When she was raising her young family, Freeda would often bake pies and cakes that she would sell in the community. She was also known for her sewing abilities. She loved fishing and the St.Louis Cardinals.
She was preceded in death by her parents, her husband and her son Ralph Edward Russell Jr. as well as two sisters and two brothers. She is survived by a daughter Ginger Johnson (Lenny) Bellflower, CA, two sons: Mike Russell (Ann) and Larry Russell (Cara) all of Springfield, and a daughter-in-law: Norma Russell, Bolivar,MO, nine grandchildren and twelve great-grandchildren. The family would like to thank the entire staff at Magnolia Square for their love and special care of Freeda. Graveside services will be held at 2:30 p.m., Wednesday, September 9, 2015, at Greenlawn Memorial Gardens, Springfield, MO with her son-in law Mr. Lenny Johnson officiating. Visitation will be held from 1 to 2 p.m. on Wednesday before services, in Greenlawn Funeral Home North. In lieu of flowers memorial contributions may be made to the Ronald McDonald House. Online condolences may be made at www.greenlawnfuneralhome.com.