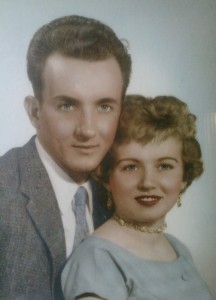 Gale Owens, age 82, of Springfield, MO, passed away Wednesday, July 22, 2015 at Springfield Rehabilitation. He was born August 31, 1932, in Buffalo, MO, to Claude and Nancy (Wallace) Owens. He was a 1950 graduate of Buffalo High School. He served in the United States Army during the Korean War. He was a devoted Christian man, saved at an early age. Gale spent most of his life working as a Master Carpenter. He was a very talented craftsman, leaving a legacy of his work in Springfield at Battlefield Mall, KTTS Radio, and numerous homes and businesses in Springfield. Gale played baseball and basketball in high school, winning a state championship in basketball for Buffalo High School in 1950. He declined an offer to play baseball for the New York Yankees. He was an avid fisherman, enjoyed bowling, and was affectionately known as Grandpa to everyone. The greatest love of his life was spending time with his family. He was preceded in death by his parents,Claude and Nancy Ellen Owens; one daughter, Donna Snow; one son, Ronald Eugene Owens; his wife, Joannis Owens; and two brothers, Howard Owens and Harold Owens. He is survived by his daughter, Sandy Parker, Springfield, MO; five grandchildren, Jayme Grover and wife Ashley, Grand Prairie, TX, Samantha Melton and husband Mike, William Grover, David Deckard, and Tracy Parker, all of Springfield; seven great-grandchildren; one brother, Homer Owens and wife Beverly, Buffalo, MO; one sister, Racine Bullington, Butler. MO; and a host of family and friends. Visitation will be held from 2-3 p.m. on Tuesday, July 28, 2015 at Greenlawn Funeral Home North. Graveside services will be held at 4:00 p.m., Tuesday, July 28, 2015, at Macedonia Cemetery, Buffalo, MO. Memorial contributions may be made to the Missouri Council for the Blind. Services have been entrusted to Greenlawn Funeral Home North, Springfield, MO.