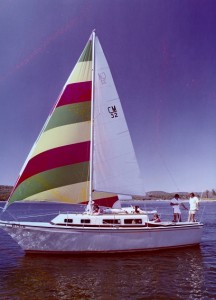 Gary Kirst entered into eternal rest on September 24, 2015, after succumbing to a major stroke. He was born on July 20, 1934, the son of Walter and Grace Kirst. He lived in Springfield his entire life and attended York School, Pipkin Junior High and Senior High School (Central), graduating in 1952. Gary was a Boy Scout and played the cornet in the Boy Scout band and SHS band. At home as a child, he learned responsibility by caring for chickens and a goat and by doing family chores. As young boys, Gary and his brother David built model airplanes and participated in airplane meets with their dad, locally and state wide. Fishing trips were a favorite Kirst family recreation. Gary attended Southwest Missouri State and was in the ROTC program. He received a deferment from the U. S. Army until his education was completed. Gary graduated with a Bachelor of Science in Mechanical Engineering from Purdue University on January 26, 1957. He served two years in the military with basic training at Fort Leonard Wood, Missouri. Gary was able to use his engineering skills at White Sands Proving Grounds in New Mexico where he was stationed. Gary’s first employment as an engineer was at James River Power Plant in Springfield. Subsequently he became project engineer for Producer’s Creamery (MidAmerica Dairymen). As a college student, Gary built his own sailboat in the family garage. His love of sailing inspired him to become an independent sailboat dealer, opening “Skipper G Sailboats”, located on Jefferson Street. He was happiest sailing or teaching sailing to customers on Table Rock Lake and was affectionately called “Skipper G.” He and Arlene shared numerous trips to New England to visit coastal areas, and the Western United States. His quality of life in the last ten years was compromised drastically by severe osteoporosis. Gary was a dutiful son and lovingly cared for his parents until they passed. He was baptized and confirmed at Trinity Lutheran Church in Springfield where he served the congregation as an usher. Gary is survived by his loving companion of thirty-four years, Arlene Eichler; brother David (Julianne) Kirst of Bridger, Montana; sister Carol (Eric) Weber of Ames, Iowa; nephew Michael Walter (Marian) Kirst of Billings, Montana; niece Clara Grace (Todd) Blauwiekel of Shawnee, Kansas; cousins Dorcas (Ron) Hill and Debbie (Bert) Adams of Springfield; cousin Janet Hughes of Fairfax, Virginia; cousin Barbara Gum of Ft Collins, Colorado; Blanche (Duane) Rintoul of Wichita, Kansas; Alfred (Lucilla) Kirst of San Jose, California; A memorial service will be held on Monday, September 28, at Trinity Lutheran Church,1415 S. Holland Avenue, at 11:00 AM, with visitation at 10:00 AM. Greenlawn North Funeral Home is in charge of arrangements. Donations may be made to The Salvations Army in his memory.