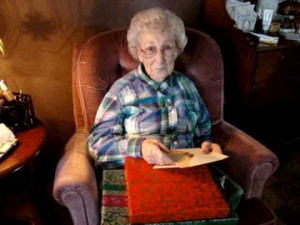 Geneta June Sears, age 95, of Harrisonville, MO, formerly of Bolivar, Elkton, and Morrisville, MO, passed away Monday, February 16, 2015, at Cass Regional Medical Center Harrisonville, MO. She was born May 15, 1919, in Table, NE, to John and Hazel (Certain) Boyle. She was united in marriage to Oren William Sears July 2, 1937. Geneta was a loving wife, mother, and grandmother. She was an inate caregiver, taking care of many people throughout her life. She loved to quilt, and collect antique dishes. Geneta and Oren were avid campers. She was loyal to her kids!
She was preceded in death by her parents; her husband Oren William Sears; two grandsons: Kenneth Ray Sears, and John Eldon Sears; and three brothers: John Jr., Nolan, and Eldon Boyle.
She is survived by three sons: Robert Sears and wife Jannett of Peculiar, MO, Charles Sears and wife Kathleen of Belton, MO, and John Sears and wife Kay of Flemington, MO; 10 grandchildren and numerous great and great great grandchildren; a sister Pansy Stevens of Redding, CA; as well as many other relatives and friends.
Funeral services will be held at 1:00 PM, Tuesday, February 24, 2015, at Pitts Chapel Bolivar, MO, with Grandsons Todd and Waylan Sears officiating. Burial will follow at Flemmington Cemetery, Flemmington, MO. Visitation will be held one hour prior to service from 12:00 to 1:00 PM, in the funeral Home. Arrangements have been entrusted to Pitts Chapel Bolivar, MO.