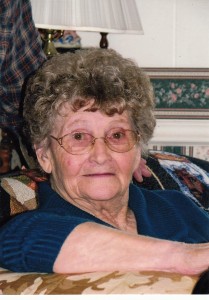 Geneva Beatrice Freeman (nee Arnold), of Springfield, Missouri, passed from this world into Heaven on October 12, 2014. She was born June 13, 1926 to Fern and Jim Arnold in Green County, Missouri. She was a beloved wife for 62 ½ years and a homemaker the biggest part of her life, had many friends and was an avid gardener. She was devoted in taking care of her husband, children, grandchildren and great grandchildren. She was preceded in death by her husband, Harold Freeman and her son, Billy Lee, her parents, two sisters (Louise Gann and Annabell Rook), one brother (Buddy Arnold) and a grandson (Joshua). She is survived by 5 children, Pat Meadows and her husband David, Ron Freeman and his wife Jane, Tom Freeman and his wife Jo Ann, Jerry Freeman and his wife Rhonda, and Sandy Nichols and her husband James, 17 grandchildren, 39 great grandchildren and 6 great great-grandchildren. The funeral services will be at 10:00 a.m. on Thursday, October 16, 2014 at Greenlawn North Funeral Home with burial in Greenlawn Memorial Gardens. The family will receive friends on Wednesday, October 15, 2014 from 6:00 p.m. to 8:00 p.m. in the Funeral Home. The family would like to thank all of the staff at Republic Health and Rehabilitation that took extra special care of our mother. We would like to say a special thank you to Jamie, Jessely and Ellen who were more than care takers, they were friends.