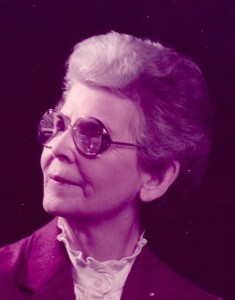 Geneva “Jeanne” (Cansler) Lawyer of Bolivar died March 11th, 2015, at Citizens Memorial Hospital in Bolivar.
She was born Geneva Lois Mann on November 12, 1924, the daughter of George and Cloice Mann of Dunnegan, MO.
She was a retired teacher and counselor. She held a Bachelor’s degree from SBU in Elementary Education and Master’s Degrees in Elementary Education and Guidance Counseling from Drury University. She taught at Mt. Etna, Star Ridge and Polk Elementary before they consolidated with Bolivar; Bolivar Leonard School and Roberson in Springfield, MO.
She married Kenneth Cansler and to this union was born Kenneth Roger Cansler. She moved to Springfield in 1969.
Jeanne married Rev. Guy Lawyer in 1974. She was a lifelong member of the 1st Baptist Church. She and Guy traveled all over the world. They would “snow bird” it to Florida each year to visit with his son, Steve, and family members who lived there.
Jeanne is preceded in death by her mother and father; husband Guy; brothers Delbert and Edgar Mann and sister Helen Campbell. She is survived by her son, Kenneth Roger and his wife Sharon; their children. Nathaniel, his wife Christine and baby Ruby; Matthew, his wife Melissa, their children Keira, Emilie, and Kryder; Steven, his wife Leeanna, son Ryan and daughters, Stoyanka, Kim Carman and McKendree; a stepson, Steve Lawyer; a sister Anita Pennell and brother-in-laws John Pennell and Efton Campbell; a sister-in-law Doris , and a host of other family and friends.
Funeral services will be held at 10:00 AM Friday, March 13, at Fairview United Methodist Church, with Pastor JC Harp officiating. Burial will follow at Rondo Cemetery. Visitation will be held Thursday, March 12, 2014, from 6:00 to 8:00 PM in the funeral home.
In lieu of flowers please make a donation to the Baptist Children’s Home. Online condolences may be made at: www.greenlawnfuneralhome.com. Arrangements have been entrusted to Pitts Chapel Bolivar, MO.