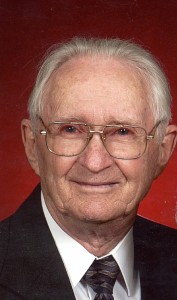 George Robert Hamilton, age 95, Springfield, MO, passed away on May 8, 2015. He was born on December 3, 1919 in Morrisville, MO, the son of Llano and Aggie (Shartzer) Hamilton. George was a WWII veteran serving with the 10th Mountain Division in Italy and the recipient of the Purple Heart. In 1982 he retired from the U.S. Post Office. As a child, George became a follower of Jesus and became a life- long student of the scriptures. He was a member of Ridgecrest Baptist Church. George was an avid fisherman, gardener, and was devoted to the love of his life, Iva June (Gilmore). After dating one month, George and June eloped on June 3, 1941 and have enjoyed almost 74 years of marriage. George is survived by his wife, June; daughter, Llynn Prater of Bolivar, MO; daughter P.K. Hinkle and Jim of Springfield; son, Jim and Mary Lee of Springfield. Grandchildren; Eric Prater, Kristen Prater, Leslie Dent and Andy; Doug Hinkle and Carie; Riley Hamilton and Emma; Leah Hamilton and Lane Hamilton. Great- grandsons; Kedron Hinkle, Bay Hinkle, Parker Dent and Mitchell Dent. Brother- in- law, Ralph Sanders, Springfield. Many nieces, nephews and cousins. He was preceded in death by his parents and a sister, Kay Sanders. Graveside service will be Tuesday May 12, 2015 at 10:00 a.m. in Oakville Cemetery, Morrisville, MO. Services have been entrusted to Greenlawn Funeral Home South. In lieu of flowers, memorials can be made to Ridgecrest Baptist Church Global Mission Fund. Directions to Oakville Cemetery; 2.25 miles west of Morrisville, MO Turn left on S. 90th Farm Road then left on E. 535th Farm Road.