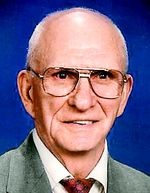 George W. Henson
George W. Henson, age 87, of Springfield, Missouri, passed away Thursday, November 19, 2009, in Woodland Manor. He was born October 10, 1922, in Pulaski County, Mo., to George and Bitha (Rodden) Henson. His parents, three wives, two daughters, one sister and four brothers, preceded him in death. He is survived by three daughters, three sons, one step-daughter, many grandchildren, great-grandchildren, and other family and friends. Funeral services will be held at 1 p.m. Monday, November 23, 2009, in Greenlawn Funeral Home North, with Pastor Alvin Hook officiating. Burial will follow in Clear Creek Cemetery. Visitation will be held Sunday, November 22, 2009, from 6 to 8 p.m., in the funeral home. Services have been entrusted to Greenlawn Funeral Home North, Springfield, Mo.