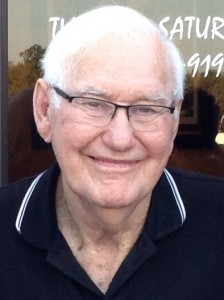 Glen E. “Pete” McCurry, of Springfield, Mo. passed peacefully from this life October 10, 2015, of complications from an aortic tear. McCurry was born in Dallas County Missouri and a lifelong resident of southwest Mo. He was 87 years old.
All of his life, Pete was a loving family man. He is survived by son, Dale McCurry, stepdaughter, Jan Norton and stepson, Jeff Norton. Also, granddaughters Kacie McGill, Lacie Barrett, Heather Lumley and Jen Coonis, grandsons Chad Norton, Sean McCurry and Gabe McCurry, and two brothers, Don McCurry and Elwin D. McCurry.
“Grandpa Pete” was also loved by a number of great-grandchildren and a host of friends and family — many of whom were gathered with him in the last 48 hours of his life as he happily said his farewells, spoke of his faith and his gratitude and comforted those who loved him and grieved the too-quickly-coming loss.
He was preceded in death by his wife, Retha McCurry, son, Ron McCurry, parents, Floyd and Nora McCurry, brother, Dolan McCurry and ex-wife and mother of his sons, Geraldine Norton Weaver.
McCurry was a lifelong businessman. Long retired from McCurry Distributing Company — a wholesale motor oil and automotive aftermarket distributorship, serving the southern half of Missouri and owned jointly with his son, Ron — he bought and sold real estate until the day of his death when he finalized the conditions of a sale, literally from his deathbed.
He loved his church family at Seminole Baptist Temple in Springfield, where he liked to point out his name on the cornerstone. He was an active Gideon for many years, and was a past member of the Missouri state board, serving as its president.
He was an outstanding basketball player into his 40s, when he traded round-ball for tennis as the sport of his passion — playing until days before his death.
Services will be handled by Springfield’s Greenlawn East Funeral Home, where visitation will be Tuesday evening from 6 to 8. Memorial services are at Seminole Baptist, 4221 South National, at 2 p.m. Wednesday. Interment follows at Mount Olive Baptist Church in rural Dallas County, Missouri.
In lieu of flowers, Glen requested that donations be made to Gideons International for bible placement or to the Seminole Baptist Building Fund.