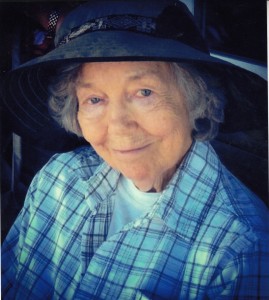 Glenda Daphne McCurdy passed away at 11:48am Friday June 5 th at her home in northern Greene County. She was born on October 8, 1928, the daughter of the late Glen and Ursula (Hankins) Lucas.
After graduating from Fair Grove High School in the class of 1945, she married Hubert McCurdy on July 10, 1948 and spent her married life in Greene County. For the past 53 years her home was the family farm near Crystal Cave. In addition to working on the farm she was a devoted mother, grandmother and great grandmother. Glenda was an avid fan of basketball, and a regular spectator at local high school and college games. She was a member of New Salem Methodist Church.
Glenda was preceded in death by her parents, her brother Jack Lucas, and Hubert. She is survived by her sister Sue Roberson; her two daughters and their husbands Sheryl and Raymond Scaggs, Janet and Joe Carpenter; and one son and his wife, Randall and Laura McCurdy; her seven grandchildren, Jennifer (Scaggs) Ruff; Corey Carpenter, Julie (Scaggs) Withers, Casey Carpenter, Caitlyn Carpenter, Jordan McCurdy, Lucas McCurdy; her ten great grandchildren Ethan Carpenter, Adelynn Ruff, Easton Withers, Anderson Withers, Ella Carpenter, Samuel Carpenter, Kai Ruff, Pierce Withers, William Carpenter and Lauren Carpenter.
Visitation will be held at 6:30 – 8:30 pm at Greenlawn Funeral Home North on Monday June 8th. Services will be at Greenlawn Funeral Home North at 3:30pm on Tuesday June 9th. Burial will follow in Robberson Prairie Cemetery.