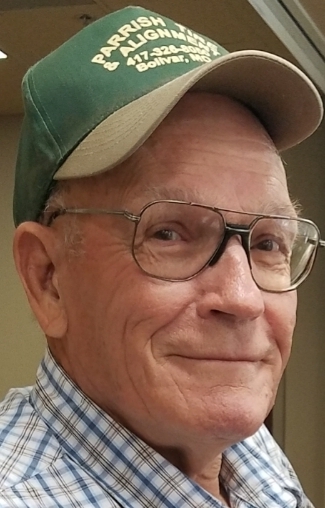 Harold D Gray was born September 1, 1936 to Lee and Jessie Gray (Whitman), on a farm in
Willard, Missouri. He lived his whole life on that same farm.
Harold attended Birdeye School, until high school and then went Marion C. Early, in Morrisville
where he graduated. His sons and grandchildren also attended there and great grands still
attend.
Over the years, Harold had many jobs. At age 20, he went to work at “Midwest Windows and
Doors” where he first drove and came to own his well known, 1956 green Chevy truck.
In the Spring of 1975, Harold met the love of his life, Evelyn. He took her as his bride January 9,
1976. He and Evelyn enjoyed 43 years and 9 months of making wonderful memories together.
Harold was so proud of his wife and their blended families.
Harold continued to work at Midwest until his “retirement”. But he always liked to say he was
“still on the clock” as he continued to help out there as late as December 2017, before falling ill,
January 13, 2018.
Harold was a teller of jokes and enjoyed laughing and making others laugh. He never met a
stranger. He could talk to someone for an hour and know their life history.
Harold loved old tractors, old cars; anything with motor. He could fix nearly anything.
He was a very hard worker. He seldom complained about work. He worked from a young boy,
right up until the day of his illness. He was ready for rest.
Harold was preceded in death by his parents, twin babies, three siblings; Luella Banks, Rosa Lea
Forrester and Howard Gray; and two grandsons; Darren Gray and Jeffrey Hicks.
Harold is survived by his wife, Evelyn, two sons from a previous marriage; David Gray (Annette)
of Morrisville, Michael Gray (Carole) of Brighton, three stepchildren; Leesa Bryan (Toby) of
Aurora, Lynette Butler (Jimmy) of Walnut Grove, Mark Lamb (Sabrina) of Springfield; Seven
grandchildren- April Nabours (Josh), Melissa Leach (Tracy), James Marlow, Chrystal Jones
(Kendal), Dustin Gray (Jesse), Brooke Snider (Will), Kylie Weems; eight great grandchildren, with
three more on the way; many nieces, nephews and countless friends.
Harold was dearly loved by all who knew him and will be sorely missed until the day we meet again.
Graveside Services will be at 2:00 p.m. Monday, October 14, 2019, at Rose Hill Cemetery, near Willard, MO. with Rev. John Fast officiating.