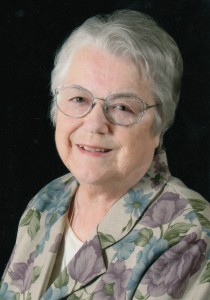 Hazel Griffin Franks, 85, died on October 2, 2015, due to complications following a short illness.
Hazel was born on December 6, 1929; in Sarcoxie, Missouri to Grover Cleveland and Minnie (Adkins) Cherry. She graduated from Springfield High School. Hazel married Charles Griffin on November 2, 1946 and the couple had 5 children.
Hazel was preceded in death by her husband Charles, infant son Larry and two sisters, Dorothy Long and June Azar. Hazel is survived by Toney Franks and her 4 children. Sons, Steve (Suzanne) Griffin, Philip (Stephanie) Griffin and daughters, Linda (Glen) Dawson and Cheri Cunningham. She is also survived by several grandchildren and great grandchildren, as well as her sister, Mary Courtney and numerous nieces and nephews.
Hazel will be forever remembered as a devoted wife, loving mother, grandmother, sister, aunt and friend to everyone she met.
Visitation is scheduled for Monday, October 5, 2015 from 5:00-7:00 pm. at Greenlawn North, with a graveside service to follow on Tuesday, October 6, 2015 at 2:00 pm. at Greenlawn Cemetery.
Pastor Joe Decker will officiate the ceremony. All are invited to attend and celebrate Hazel’s life.