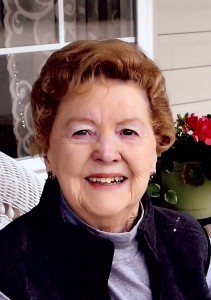 Helen Francis Flynn, summited with love by her children. Our mom was born in Bolivar September 19, 1923 and died in Bolivar just as a new and pain free day welcomed her to Heaven on December 18, 2015. After marrying our dad Forrest Flynn, they moved to his home place in Swanton, Ohio and raised a family of four children; Diana, Teresa, Jerry and Craig.
Helen lived for her family and her devotion to the Catholic Church. She was preceded in death by our dad-her husband and three of her eight cherished grandchildren, her parents, Lawrence and Alma Polodna and three brothers. She is survived by her children and sisters, Eva JoAnn Krtek and Anna Jackett.
Visitation and Prayer services will be on Sunday, December 20, 2015, from 6:00 to 7:30 pm in Sacred Heart Catholic Church Bolivar, MO. Funeral Mass will be on Monday, December 21, 2015 at 11:00 am in the church. Burial will be in Swanton Cemetery, Swanton, Ohio on December 29, 2015.