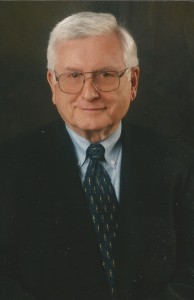 Henri “Hank” George Visio went to be with his Lord and Savior on Sunday 02/21/2016 surrounded by his family. He fought the fight, finished the race, and kept the faith.
Hank was preceeded in death by his wife of 67 years, Dorothy June [Marks] Visio. He leaves behind 9 children. Susie Guidry [late husband Brett], Carole Kidwell, Michelle Visio, George Visio [wife Peggy], Hank Visio Jr. [wife Debbie], Patty Toler [husband Greg], Maggie McDowell [husband Randy], Steve Visio [wife Nancy] and Charles Visio {late wife Cydney]. He leaves behind 15 grandchildren, 10 great grandchildren.
He was Born October 23, 1926 in St. Louis Missouri To George John Visio and Stella Mildred [Evans] Visio. He is one of three children. He is survived by one sister Evelyn Radosevic [husband Don], and the late Peggy Abernathy. Hank attended Rountree Grade School, Jarrett Jr High School and Central High School.
After serving in WWII as a soil engineer, the war ended and he came back home to Springfield Mo. Hank graduated from what was then Southwest Missouri State College getting his degree in Economics and Accounting.
Hank was a successful business man. He owned Executive Data Control from 1972 to 2003. He served as President for the National Business Forms Association from 1993 to 1994. He served on the Board of Directors for the Victim Center from 1999 to 2003.
A memorial service for Hank will be at 2:00 P.M. Thursday, February 25, 2016 At Greenlawn Funeral Home East. A memorial visitation will be from 1:00 to 2:00 P.M. prior to the service.
Hank loved to help others. In Lieu of flowers, Hank requested donations be made to Salvation Army,636 N. Boonville 65802 or Ozarks Food Harvest, PO Box 5746, Springfield Mo 65801-5746.