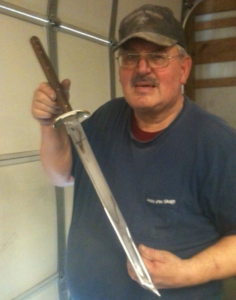 2Timothy 4:7
Henry Cook, 66, went home to his Savior Jesus Christ on Sunday, November 29, 2015 at 10:35 a.m. at Cox South Hospital.
He was born April 3, 1949 to parents, Earl Harding Cook and Marjorie (Hindman) Cook of Springfield, Missouri.
He is survived by his wife Sally (Thomas) Cook. One step-son, Timothy Alan & Linda Dixon of Norway. Two sons, Luis (Cook) Rideoutte of Missouri and Clay & Robin Cook of Missouri. Two daughters, Sara & Matt Wright of Missouri and Linda & Damion Wade of Arizona. Four brothers, Wayne & Patty Cook of Missouri, John & Lisa Cook of Tennessee, Tom & Sally K. Cook of Missouri and Robert & Sheryl Cook of Missouri. Three sisters, Margaret & Larry Franklin of Missouri, Patsy & Jerry Poe of Kansas and Leona & Gary Wiseman of Missouri. Also a maternal aunt, Jo Ann & Don Puyear of Arizona.
Henry was preceded by parents, two brothers, James Cook and Timmy Cook.
He attended West Port Elementary School, Study and Jered Jr. High School and Graduated from Central High School in 1968. Then later in life he graduated from a mail order correspondence course in auto mechanics. Then worked for 40 years as a custom brake reliner and refurbisher for large trucks.
In 1969 he was drafted in the U.S. Army, trained as a telecommunications specialist at Fort Leonard Wood, Missouri. He was sent to Vietnam and assigned to the 101st Airborne Division as a machine gunner on the Huey helicopter gunships. During his service there he was awarded 1 Bronze Star and 2 Silver Stars for courageous action under fire and earned a Combat Infantry Badge. Then changed to Unit Cook Status prior to leaving Vietnam and completed his military requirements at Fort Campbell Kentucky 101st Airborne Headquarters.
He was a master knife maker, blacksmith a loving kind, gentle, compassionate husband, father, brother, teacher, friend and studious man of God. If a person he knew had a need and he could help he would.
He had a city sized following of family and acquaintances. He was loved by most and will be sorely missed. He loved the Lord with all his heart and shared the gospel with those he came in contact with, especially those who he mentored and taught his knife making craft.
Visitation will be Wednesday, December 2, 2015 from 6:00 p.m. until 8:00 p.m. at Greenlawn Funeral Home East. Funeral services will be Thursday, December 3, 2015 at Boulevard Baptist Church, Springfield, Missouri at 12:00 p.m.. Burial will be at Missouri Veterans Cemetery with full military honors.