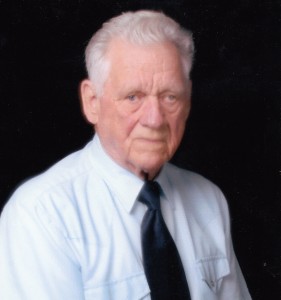 Herbert Lee Wright, age 95, of Ozark, MO, passed away Wednesday, October 28, 2015 at Ozark Nursing And Care Center. He was born December 1, 1919, in Nowada, OK, to Barney and Lydia (Stafford) Wright. Herbert served in the United States Army during World War II. He was united in marriage to Jaunnell Lillian Berry on November 21, 1945. Herbert worked as a painter. He was a proud member of the Painter’s Union. He loved to visit with people and he never met a stranger. He will be greatly missed by his family and friends
He was preceded in death by his loving wife, Jaunnell Lillian Wright; parents, Barney andLydia Wright; one son, Preston Wright; a daughter, Karen Snyder; six brother; and one sister He is survived by his two children, Michael Wright, Grove, OK and Beverly Wright and grandson Kenny Wright, Springfield, MO; eighteen grandchildren; numerous great-grandchildren; and a host of family and freinds.
Graveside services will be held at 1:00 p.m., Saturday, October 31, 2015, at Greenlawn Memorial Gardens, Springfield, MO. Services have been entrusted to Greenlawn Funeral Home North, Springfield, MO.