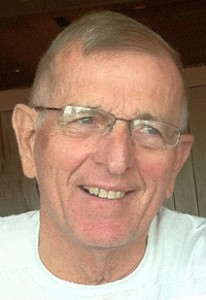 Herbert Ray Curtis, aged 72, of Springfield, MO, passed away on the evening of Tuesday, April 28, 2015. He was born in Oktaha, OK, on March 24, 1943, to Claude and Maude Curtis. The youngest of three children, he is survived by Clifton Curtis of Lowell, AR, and Sharon James of Benton, AR. The night after graduating from Springdale High School in 1961, he married Patricia Ann Hatfield on May 27, his wife of 54 years, who survives him. Together they have two children, Paige Lamar of Tulsa OK, and Chris Curtis of New Wilmington, PA. He was known affectionately as ‘Papa’ by his three grandchildren, Lily Wheeler of Tulsa, OK and Tessa and MeKenna Curtis of New Wilmington, PA. Herb started working for Dillon’s grocery store in Fayetteville, AR, eventually managing stores in Fayetteville, AR, Rogers, AR, Pryor OK, and Springfield MO. Following a brief retirement in 2000, he worked for Price Cutter in Springfield. The family requests that donations be made to the Alzheimer’s Foundation of America (http://www.alzfdn.org/) in lieu of flowers. He will be buried in a private service in Springdale, AR.