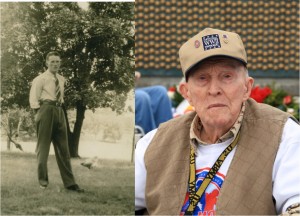 Homer Ray Steele, born March 9, 1920, passed into eternity early Monday morning, October 5, 2015, with his son at his side. He was preceded in death by his parents, George G. and Elsie (Clark) Steele. Homer and his surviving wife of 70 years, Joan, lived on the family’s Missouri Century Farm that was first established in 1881, south of Pleasant Hope, Missouri. Homer is also survived by five children: Betty Steele of Springfield, Karen and husband Bill Weigt, Davis, California, Linda and husband David Hough, Springfield, Bobby Steele and wife Robin, Springfield, Becky and husband Dennis Bledsoe, Pleasant Hope, 12 close-knit grandchildren, and a “rockus” group of 18 great-grandchildren.
Homer’s life was very well lived with family and country at the core. He graduated from Springfield Senior High in 1939 and served as an infantryman in the United States Army during WWII. Stationed at Camp Carson, Colorado, prior to European deployment, Homer made friends for life with Greene County natives Jerry Chandler, Bill Easterly, and Doyle McGinnis whose influences have spanned generations. Homer served on the front lines of combat through France and Belgium
and within miles of the German border before suffering a permanently disabling enemy gunshot to his left hand.
Prior to his military service, Homer had worked on the family farm and on construction jobs, including the O’Reilly Hospital in Springfield where he was later hospitalized while recovering from his war injury. Once home, Homer married Joan Shipman of Fair Grove on August 31, 1945, and the couple lived on the Steele family farm. Homer milked a small herd of dairy cows before converting to a beef cattle operation.
The Steele family raised and showed pleasure horses at local saddle club events. Homer was well known for his ability to raise chickens, turkeys, pheasants, roller pigeons, homing pigeons, and other fowl. Among his birds were peafowl sold to Dickerson Park Zoo in Springfield. Homer got his first chickens in 1938 from a former Central High School teacher and life-long friend, Harry Suttle, who urged him to “come to my place tonight with a couple of tow sacks.” Homer and Harry nabbed chickens from their roosts in cedar trees on Harry’s farm on East Cherry Street, and those became foundation stock for poultry that still thrive today.
A kind-hearted, sensitive man with grit and gratitude, Homer is among the group Tom Brokaw immortalized in 1998 when he wrote,” . . . the true heroes of the world are far greater than the inflated images we project onto some single talent, that distinctions among real people are small in fact but large in effect, that the true heroes are those with an ounce more courage, a hair more kindness, a mite more hope—those whose pedestrian virtues nurture the world.” As such, Homer was able to enjoy life’s simple pleasures: finding Morel mushrooms, catching an occasional fish, enjoying a “slicing” tomato, and growing I O Chief corn and Rocky Ford cantaloupe. He remained an expert shot his entire life, and had many successful deer and turkey hunts. He occasionally served as clerk for Easterly Brothers Auction where he often recorded transactions by name, not number. Homer was an accomplished story-teller with a mind for detail, and the oral tradition he perfected lives on in the lives of family and friends. Homer epitomized what it means to have been part of the “Greatest Generation.”
Homer Ray Steele will receive full military honors beginning at 10:00 a.m. during services at Greenlawn North Funeral Home on October 9, 2015. Donations may be made to the Wounded Warrior Project at www.woundedwariorproject.org/Donate