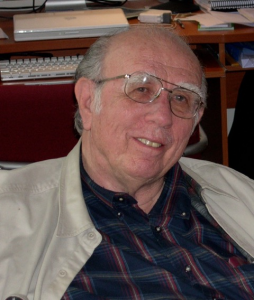 Reverend Hugh Edward Davis, 84, of Springfield, Missouri, went to be with the Lord on Father’s Day, June 19, 2016. Hugh was born in Boston, Massachusetts, on March 16, 1932 to Dr. Hugh Orton Davis and Martha Edwards Davis. He was “Ed” to family and friends until he entered the ROTC during college, and by the time his first wife, Sarah, passed away in 1998, most knew him as Hugh.
As the son of an Army Lt. Colonel during World War II, Hugh lived in the Boston Cambridge area of Massachusetts, Miami Beach, Florida, and Washington, DC areas while his father was on active duty and overseas. But his favorite place to be was with extended family in Nacogdoches, Texas. It was there, as an only child, that he had his happiest memories with his father’s extended family; aunts, uncles, and cousins. He also fondly remembered his high school years at Western High School in Washington, DC, where he lettered in Drama Club.
After a brief stint studying Architecture at the University of Oklahoma, Hugh received his BA from Baylor University in Waco, Texas, majoring in Drama, and minoring in Theology. He maintained a love of architecture, especially the work of Frank Lloyd Wright, for the rest of his life. Hugh enjoyed his time in Baylor Theater and his children loved to ask him about the time he played a role in Baylor Theater’s production of The Mikado.
Hugh met his first wife, Sarah, in the Baylor University Music Library and they were married on December 31, 1953, in Weatherford, Texas, with Sarah’s father, the Rev H.J. Starnes, officiating. From Baylor USAF ROTC, Hugh was stationed at Amarillo Air Force Base in Texas. Hugh was an ordained Southern Baptist Minister and after entering the Air Force Reserves, Hugh pastored churches in Kingsland and Electra, Texas.
In 1957, Hugh and Sarah decided they were ready for a new start and they moved to Los Angeles, California. Hugh became involved in the Republican Party there and remained involved as a delegate to local conventions, and interested in National and World politics for the rest of his life. It was in California that Hugh was employed at Douglas Aircraft and began his career in Planning and Scheduling, working on projects ranging from the Apollo Program to ARAMCO Oil, which allowed him to travel to Saudi Arabia and The Hague, Netherlands. His career took the family from California to New Orleans, LA, Houston, TX, and Washington, DC where he retired. In 1992, Hugh retired from the USAF Reserves as a Lt. Colonel.
Hugh’s heart was for the ministry though, and from the time he rededicated his life to the Lord through Full Gospel Business Men’s Fellowship in Houston, and was ordained as an Assemblies of God minister, he planted and pastored churches wherever his business career took him.
In 1998, after an extended illness, Hugh’s first wife, Sarah, passed away. Hugh felt called to European missions and began seeking missionaries from Europe to discuss his vision of prayer for the European Union. One of the first missionaries he met was Norma Jensen, a retired missionary to Belgium who was living in Virginia. Hugh and Norma felt a connection from their first meeting and they married on June 3, 2000. They ministered together promoting prayer for the EU in Europe and the USA, traveling to Europe many times. After retiring to Springfield, Missouri in 2008, they continued their work in the EU prayer ministry, taught a Sunday school class focusing on prayer for Current Events, and as Hugh said, they had fun. Norma brought a special joy to Hugh’s later life and he loved her very dearly.
Hugh is survived by the family he loved so much: his wife, Norma Jensen Davis of Springfield, MO, his children Martha Davis Revely (Bill) of Dove Canyon, CA, Sarah “Ruthie” Davis Posey (Jeff) of Riverside, CA, Hugh Kemper Davis (former wife, Cheryl) of Springfield, MO, and Laura Davis Van Dolsen (Warren) of Springfield, MO, his grandchildren Sarah Revely Johnson (Patt) of Mukilteo, WA, Martha “Betsy” Weaver (Mark) of La Crescenta, CA, Laura Katharine Smith (Brad) of Fountain Valley, CA, Spencer Davis Revely of Dove Canyon, CA, Davis Jeffrey Posey of Riverside, CA, Hugh Parker Davis of Fairfax, VA, Jasper Martin Davis of Arlington, VA, Kathryn Marie Davis of Arlington, VA, Laura Olivia “Libby” Van Dolsen of Springfield, MO, Aaron John “AJ” Van Dolsen of Springfield, MO, and his great grandchildren Lyndi Beth Johnson, Asher Dean Johnson, Stuart Timothy Smith, Bradford William Smith, new baby girl Smith due July 2016, and new baby Weaver due November 2016. Hugh was predeceased by his beloved first wife, Sarah Starnes Davis (10/25/1998), his son, Hugh Starnes Davis (6/19/1957), and his grandson, William Frederick Revely IV (10/31/2013).
Services will be held at Greenlawn Funeral Home East, 3540 East Seminole, Springfield, MO on Friday, June 24, 2016, Rev. Jeff Peterson of Central Assembly of God officiating. Viewing will be at Noon and the Service at 1:00 PM with Military Honors following at 3:00 PM at Missouri Veterans Cemetery, 5201 S. Southwood Road, Springfield, MO.
The family would like to thank the staff at Citizens Memorial Hospital in Bolivar, MO for their loving care of our precious Daddy during the final week of his life, and the many dear friends and extended family members who have expressed their love and support during this difficult time.
“Well done, good and faithful servant… Enter into the joy of your Lord.“ Matthew 25:21