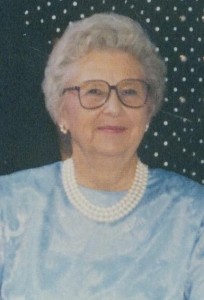 Inez Claxton passed away peacefully on the morning of February 15, 2015 at The Manor at Elfindale in Springfield, Mo. at the age of 93 years. She was born on June 19, 1921 at Iberia, Missouri the first child of the late Curtis and Charlotte Irwin. Inez graduated from Iberia Junior College. And attended Berea Collage, Berea, Kentucky. She attended college on a weaving scholarship.
Inez married Dr. Freeman Claxton in 1942. She helped Dr. Claxton in his practice of family medicine in Red Oak and Wilburton, Oklahoma and Mansfield, Missouri. They celebrated their 60th wedding anniversary before Dr. Claxton’s death in 2002.
Our Mother was a devoted, loving wife, a caring nurturing mother and an example of true Christian love for those who knew her. All will remember her infectious smile, sense of humor and laughter.
Inez is survived by a daughter Christine Reed and husband Forrest, a son Dr. Carl Claxton and wife Linda. She is survived by brother’s Roger and Robert Irwin and sister-in-law Pat Irwin. Several nieces and nephews survive her. Inez’s sister Eula Sneed and Brother Ronald Irwin precede her in death.
She was the proud Grandma of Dr. Robin Meyer, Russell Reed, Pamela Dillow, Melissa Bollwerk, and Garrett Reed. Her great-grandchildren are Sydney Bland, Jackson Meyer, Audrey Meyer and Aiden Dillow.
Inez was a long time member of the South National, East Sunshine and most recently of the Sunset Church of Christ.
Our family is so appreciative of the love and care given to her by her personal caregivers and staff at The Manor at Elfindale. The family would also like to thank the staff of Hospice and Palliative Care who so lovingly made Inez’s life transition more bearable for all.
Funeral Services will be at 10:00 a.m. Friday, February 20th at Greenlawn Funeral Home East 3540 East Seminole with visitation from 9 to 10 a.m. before service. Joe Bright and Dwight Samuel officiating. Burial will follow in the Claxton Cemetery under the direction of Greenlawn Funeral Home East.
In lieu of flowers the family request memorial donation be made to Fair Haven Children’s Home, 3132 N. Fair Haven, Strafford, MO. 65757