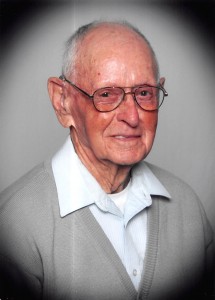 Ira Benjamin Harrison Dove, Jr. 97, World War II Veteran, went home to be with the Lord, Thursday, March 10, 2016 at 2:32 am.
Ira was born and raised in Fredonia, KS. He was a miller by trade. When war injuries prevented him from working in the flour miller at Seattle, WA. He moved his family to Missouri in 1949.
He and his wife, Juanita, raised their six children on a farm near Willow Springs, MO. They moved to Springfield in 1985. His wife preceded him in death.
Survivors are three daughters, Sharon Dove, Myra McClellan, and Deborah Lozano, all of Springfield; three sons and their wives, Ira Robert Doyle and Mary, Pevley, MO, Gary Dove and Terry, Louisburg, MO, and Daniel Dove and Waynette, San Antonio, TX; two siblings, sister, Rose Audrey Cummings and brother, Paul A. Dove, Fredonia, KS: Ira also had twelve grandchildren; thirty great-grandchildren; six great-great-grandchildren; and a host of other relatives and friends.
Ira loved God, Country, Family and Friends. He was also an avid outdoorsman.
Visitation will be held at Greenlawn North Funeral Home in Springfield from 2-4 pm, Sunday, March 13. Funeral services will be at 11:00 am, March 14, 2016 at Berean Baptist Church, Springfield, MO. Burial will be in Greenlawn Memorial Gardens.