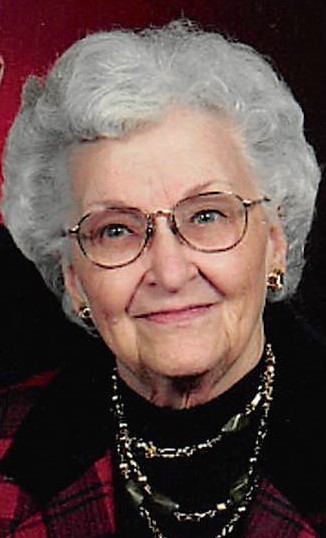 At the age of 11, June became a follower of Jesus Christ. Throughout her life, she was active in several churches and is currently a member of Ridgecrest Baptist Church. June began dating George Hamilton in the spring of 1941 and after 3 weeks was united in marriage on June 3rd. This love story continued for 74 years.

June lovingly provided a strong family life filled with laughter, warm hospitality and spiritual guidance. She was a gifted seamstress, enjoyed quilting, and floral gardening. She knew how to make her house a home for her family.

June is preceded in death by her husband, George, her parents, a brother, Paul Gilmore and sisters, Margaret Gilmore, Lillian Rader, and Bobbi Brautigam.

Graveside services will be at Oakville Cemetery, Morrisville, MO, on Thursday, May 30, 2019 at 3 pm.
In lieu of flowers, memorials can be made to St. Jude Children's Research Hospital or The Wells of Joy Ministry, in care of Greenlawn Funeral Home South.

Direction to the Oakville Cemetery is 2.25 miles west of Morrisville on Hwy 215. Turn left on S Farm Road 90, left on Farm Rd 535.
Services have been entrusted to Greenlawn Funeral Home South.