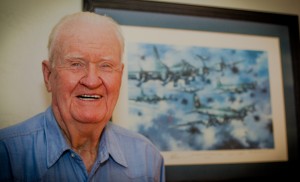 J.N. Edgar born March 6, 1924 in Union Star, MO, passed this past Sunday, January 18, 2015 at the age of 90. J. Edgar was a long time resident of Springfield, MO.
J. Edgar was preceded in death by his parents, Sgt. Robert J. Edgar and Myrtle (Arnold) Edgar; his brothers, Robert G. Edgar, Maj. Lyle W. Edgar (ret.), Maj. Clifford Edgar (ret.), M/Sgt. Edward Edgar (ret.), Sgt. Maj. Edwin Edgar (ret.), C.W.O. Charles Edgar (ret.); his sisters Myrtle(Edgar)Hunsucker Wagner, Alice (Edgar) Smith, Lois (Edgar) Franks, Ruth (Edgar) Patton; and his half-siblings Elmer Arnold, Marie (Arnold ) Foster, and Bertha Arnold. Collectively, he and his brothers served over 100 active years in the military.
J. Edgar is survived by his sister Helen (Edgar) and husband Cecil Humphrey, his daughter and her husband: Erin (Edgar) and Danny Stottle, 5 grandchildren, one great grandchild, and many beloved nieces, nephews, cousins and friends.
J. Edgar was a Member of the 8th Air Force, 95th bomb group, 336thsquadron during WWII. He was a radio operator and machine gunner on one of the first B-17’s to bomb Berlin. On his 20th birthday, in 1944, he was shot down over Germany and taken captive as a POW for 13 months. He survived the Death March across Germany and was finally liberated by the American 101st Inftry. Div. on the 25th of April 1945. After liberation he re-enlisted and completed his 20 years of service to the USAAF. Following retirement from the military, he became friends with President Kennedy’s Secretary of the Air Force, Eugene M. Zuckert, and upon his suggestion began his 20 years of service with the U.S. Treasury Department. He enjoyed genealogy and fixing antique radios. He was member of the Mensa Society, and was immensely proud of his family and country.
Services for J.N. Edgar will be held on Thursday, January 29th, 2015, 11:00 am at the Missouri Veterans Cemetery in Springfield, MO, and are being handled by Greenlawn Funeral Home in Springfield, MO. There will be military honors and a short service at the Chapel on site.