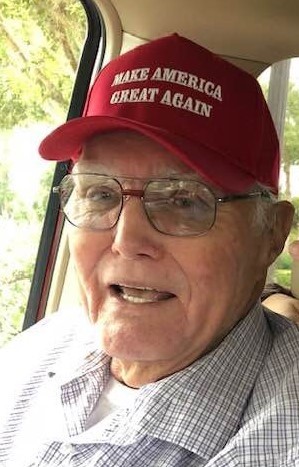 Jack Harold Lewy of Bradenton, Florida departed this life on Saturday, May 25, 2019 at the Lakewood Ranch Medical Center in Sarasota, Florida following a short illness. Graveside services will be held at 1:00 p.m. on Friday, May 31 at the Springfield National Cemetery. Jack was born in Springfield, Missouri on April 20, 1933 to Jewell (Judy) Williams. He gave his life to Christ at an early age and was a member of the Buffalo First Baptist for several years and most recently he attended Sarasota Baptist Church in Sarasota, Florida. He owned and operated the County Courier Newspaper in Buffalo, Missouri from 1972 until he retired in 2012. Jack faithfully served our country by enlisting in the United States Navy in 1951. He served in the Korean conflict and in Japan aboard the General Anderson and earned several service medals until he was discharged in 1955. Jack loved his country and was proud to be an American soldier. He would often reminisce about his military service and he loved to talk about antique cars and politics. Jack is survived by his loving daughter, MariLynn Polachek and her husband, Mike, of Bradenton, Florida, his son, Mike Lewy and wife, Sheryl, of Urbana, Missouri, and his granddaughters, Kimberly Lewy, Ashlee Paro and Amberlee Paro. He was preceded in death by his wife, Evelyn Lewy, his parents, Ernest and Jewell (Judy) Busch, his brother, Joe Busch and several aunts and uncles. He was a loving father and grandfather and he will be sorely missed by his family and friends. In Lieu of flowers the family would like for memorials to be made to the Wounded Warrior Project, in care of the funeral home. Services are entrusted to Greenlawn Funeral Home South.