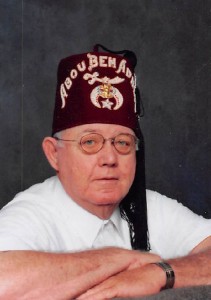 James Earl Cox, 73, of Springfield, Missouri, went peacefully to meet the Lord on September 16, 2015. He was blessed to have spent his final days at home, cared for by his loving family and the staff of Hospice Compassus. Born September 27, 1941, he was the son of William Carl and Genevieve Lucretia. Upon the death of his father, he was raised by his stepfather, Paul Morrill. Affectionately known as “Jim”, he was an avid outdoorsman who loved to hunt and fish with the results of his efforts culminating in the annual fish fry where friends and family were treated to the “catch of the day,” cooked to perfection as only he could and served up with a song or two from his guitar – country, gospel and bluegrass being his favorites. Those who knew him well often found him in front of the slots, winning and winning big, but always willing to share the secrets of his success. One of his proudest accomplishments was becoming a Mason. He was a member of the Temple Blue Lodge #422 and earned his 32nd degree as a member of the Scottish Rite of Joplin. A member of the Abou Ben Adhem Shrine, he served as a greeter and hospital “dad”, transporting children to the Shriner’s Hospital in St. Louis for care. He is survived by three children, Sheryl Kirchhoff and Rick of Smithville, Lisa Ussery and Ron of Springfield, and James Cox and Julie of Willard; two sisters, Alma Donley and Larry of Springfield and Alice Haas and David of Boise, Idaho; along with ten grandchildren, seven great-grandchildren, numerous nieces, nephews, cousins and a multitude of friends. He was preceded in death by his brother, Louis Cox and sister, Josie Skelton. His laughter and contagious smile will be missed by all who knew him. In lieu of flowers, contributions can be made to the Shriners Hospital, 601 St. Louis Street, Springfield, Missouri 65802 and Hospice Compassus. A visitation will take place on Sunday, September 20, 2015, 4:00-6:00pm. Funeral service will be Monday, September 21, 2015, 10:00am, both at Greenlawn Funeral Home North. Interment will immediately follow services at White Chapel Memorial Gardens.