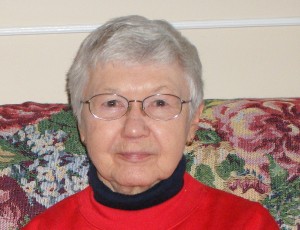 Jean D. Strand passed away Friday, January 29, 2016, at the age of 91. She was born January 8, 1925 in Axtell, Nebraska. She was baptized January 29, 1925 in Axtell and was confirmed on May 28, 1939 at Zion Lutheran Church in Gowrie, IA where she remained a member until moving to Springfield, MO.
Jean moved with her parents to Boxholm, IA, in 1927 where her father farmed. They then moved to a farm in Burnside, IA and to Gowrie, IA in 1937. She graduated from Gowrie High School in 1942, and worked as a bookkeeper in Gowrie.
She married Vincent T. Strand on October 1, 1949. They lived in Des Moines, IA until 1951 when they moved to the Strand family farm south of Gowrie. They had two children, Julie Elizabeth and Joel Philip. Vince and Jean retired to Ames, IA in 1989 and in 1990 they moved to Branson, MO. In 1992 they moved to Kimberling City, MO and then to Springfield, MO in 1996.
Jean served on Church Council, was active in Lutheran Church Women, and sang in the church choir and other music groups throughout the years.
She is survived by their children Julie Everett, Joel Strand and his wife Debbie, grandchildren Justin, Christopher and his wife Laura, and Mallory and her husband Greg Machen, great-grandchildren Lily and Myles, Vincent’s brother Marold Strand, Vincent’s sister-in-law Marlys Strand, Jeans sister-in-law Marvel Peters and numerous nieces and nephews.
A Memorial service will be held on Saturday, February 6, 2016 at 10:30 am in Messiah Lutheran Church in Springfield. In lieu of flowers, donations may be made to Lutheran Social Services of Iowa or Messiah Lutheran Church. Services have been entrusted to Greenlawn Funeral Home South.