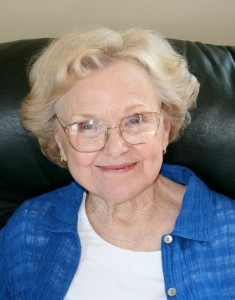 Jean Haseltine Knabb, at the age of 93, passed away gently just like the beautiful life she lived, on Tuesday, August 18, 2015. She was born in Springfield, Missouri on May 17, 1922, to the late Kirk G. and Loreen (Ritchey) Haseltine. She was married for 63 years to her loving husband, Dr. Henry F. Knabb, Jr.
She was preceded in death by her husband, parents, and big brother, Horace Haseltine, her hero!
God could not have blessed us with a better mother, grandmother, or great-grandmother. She gave us more love, happiness, and joy than anyone could ever imagine.
Jean was happiest when she was spending time with her family. She was an avid reader, talented artist, and skilled knitter; making the most beautiful keepsakes for her grandchildren and great-grandchildren. She was the solid foundation that enabled her family to realize their dream of raising and showing Arabian horses throughout the country. Later in life, Jean and Henry raised champion Persian Cats, showing one to be thirteenth best cat in the country.
Jean was also a long time member of First Baptist Church in Springfield, a member of the Daughters of the American Revolution, and Hopewells, a charity organization. At Drury College, she was a member of Pi Beta Phi sorority and in high school, Lambda Alpha Lambda.
She will be forever missed and lovingly remembered by her daughters Suzy (Dr. Troy) Major II, Carolyn Caudle, Andrea (George) Wohlschlaeger; grandchildren Dr. Troy (Penny) Major III, Bryan Major (Misty McMahan), Courtney (Jimmy) Johnson, Don (Kara Pagel) Caudle III, Laura (Jordan) Gerstner, Ashley (Jared) Bonnell; great-grandchildren Ashton and Kylie Major, Avery and Cailyn Johnson, Lucas and Cadence Gerstner, Aubrey and Harper Bonnell.
Visitation will be Friday, August 21, 2015, from 5 to 7p.m. at Greenlawn Funeral Home East. The Funeral will be held Saturday, August 22, 2015, at 11:00 a.m. at Greenlawn Funeral Home East. In lieu of flowers, memorials may be made to the Juvenile Diabetes Research Foundation or the charity of your choice.