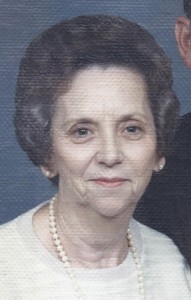 Jean Hillhouse of Springfield, Missouri was called home to be with her Lord on December 16, 2014. Jean was born on October 25, 1928 to Callie and Myrtle Mahan of Theodosia, Missouri. She graduated from Gainesville High School and went on to teach elementary school at Shiloh for a few years. On December 13, 1947, Jean married Ray W. Hillhouse of Gainesville and they lived in Kansas City, Missouri till 1951 and then moved to Springfield, Missouri. Jean and Ray had two sons, Jim Hillhouse of Plano, Texas and Roger Hillhouse of Mountain Grove, Missouri. Jean worked for Lilly Tulip about 32 years before retiring. She was a faithful member of the First General Baptist Church of Springfield, Missouri. Jean was well known for her cooking and love of family.
Jean is survived by her two sons; Jim Hillhouse (wife Pamela) and Roger Hillhouse (wife Christy); two grandchildren, Dr. Justin Hillhouse/wife Audrey and Heather Koval/husband Sean Koval; four great grandchildren, Emily Hillhouse, Colt Hillhouse, Abigail Koval and Luke Koval and brother Bill Mahan of Lutie, Missouri.
Jean was preceded in death by her husband, Ray W. Hillhouse, father and mother, Callie and Myrtle Mahan, and two sisters, Beulah Mashburn and Alene Clayton.
Visitation will be on Thursday, December 18, 2014 from 6:00 PM to 8:00 PM at Greenlawn Funeral Home – East. Funeral services will be on Friday, December 19, 2014 at 10:00 AM at Greenlawn Funeral Home East with burial at 2:00 PM at the Lutie Cemetery in Lutie, Missouri.
Jean’s family would like to give a special thank you to the staff and residents at The Waterford at Ironbridge for their care and compassion.
In lieu of flowers contributions may be made to St. Jude’s Children Research Hospital 762 Danny Thomas Place Memphis, TN 38105 or the Lutie Cemetery C/O Jo Stehle at Century Bank of the Ozarks 6151 US Hwy 160 Theodosia, MO 65761