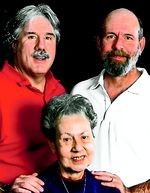 Jerry Elizabeth (Green) Van Hook Mrs. Jerry Elizabeth (Green) Van Hook, age 79, of Springfield, Mo., died Monday, October 5, 2009 in Cox Medical Center South, in Springfield, Mo., following an extended illness. She was born in Trumann, Ark., on May 28, 1930, to Charles Emmauel and Jewell (Carr) Green. She married Jackie Adkins Van Hook on December 5, 1953, in the State of Washington. She was a longtime resident of Springfield and member of Jefferson Avenue Baptist Church. Mrs. Van Hook was preceded in death by her parents. She is survived by her husband, Jackie; their son and daughter-in-law, Stephen Christopher and Jennifer Hall Van Hook of Shawnee, Kan.; their son and daughter-in-law, Michael Alan and Stacey Van Hook of Rock Hill S.C.; her granddaughter, Tiffany Rene (Van Hook) Camacho of Blue Springs, Mo.; her greatgranddaughter, Amaya Renee Camacho of Blue Springs, Mo.; and her step granddaughter, Stephanie Ann Morton and her husband, Jared of Overland Park, Kan. She is survived by one brother, Charles Edward Green and his wife, Barbara Ann; one sister, Vivian (Green) Howard of Springfield, Mo. She is survived by numerous nieces and nephews. She was a loving wife and mother, especially proud of her two sons. She traveled extensively throughout her husband’s military career and upon his retirement in 1969, returned to Springfield. On his retirement from the Springfield Public School System in 1992, they lived in Italy while her husband taught for the Department of Defense School System and then returned to Springfield in 1996. She enjoyed embroidery, reading and was an avid sports fan, especially for the St. Louis Cardinals. Funeral services will be held in Greenlawn Funeral Home East at 11 a.m., Friday, October 9, 2009, with Rev. Tom Vanzandt officiating and burial following at Missouri Veterans Cemetery. Visitation will be in the funeral home from 7 to 8 p.m., Thursday, October 8, 2009. Luncheon will follow the burial at the family home, 1463 S. Ginger Blue, Springfield.