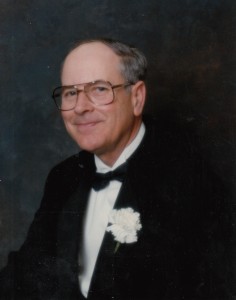 Jesse Lee Eldred, age 80, passed away on March 7, 2015 in Springfield, MO. He was born on July 19, 1934, the only child of Jesse and Bethel (Ellis) Eldred. Jesse retired from the United States Postal Service on October 2, 1992 after 35 years.
Jesse Lee attended Southwest Missouri State University, where he played on the university tennis team and planned to study forestry. He joined the ROTC and served in the Missouri National Guard for nine years.
Jesse was a founding member of both Crestview Church of the Nazarene and Faith Christian Fellowship. In honor of Jesse’s work with Sunday School Ministries, both as a teacher and as a superintendent, and because of his love for children, the school library of the Watoto Children’s village in Kampata, Uganda was dedicated in his name in August 2003. Sunday School was one of the main goals in his life, seeing that boys and girls find Christ through the Word of God.
Jesse married Roberta “Bobbie” Starkey on October 28, 1956. A union that continued at the time of his death, some 58 years. Survivors include his wife, Roberta (Bobbie); his sons, Woodrow and Benjamin; daughter-in-law, Cary; and granddaughters, Morgan Elizabeth and Leah Rose.
A visitation is to be held on Wednesday March 11, 2015 from 6:00 – 8:00 pm at Faith Christian Fellowship, 1535 St. Louis Street in Springfield. The funeral service will take place on Thursday March 12, at 2:00 pm also at the church. Burial will follow at Greenlawn Memorial Gardens, 3506 N National Ave, Springfield. Online condolences may be made at: www.greenlawnfuneralhome.com
“I have fought a good fight, I have finished my course, I have kept the Faith”. II Timothy 4:7