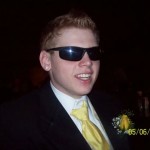 Jesse Aarron James McCoy, age 21, of Nixa, MO, passed away Friday, December 5, 2014. He was born May 14, 1993, in Springfield, MO, to Michael and Julie (Prier) McCoy Jr. He was a member of the Church of Christ. He was preceded in death by his grandfather Michael Prier, great-grandmother Delores Rall and great-grandfather Kenneth Thomas. Jesse is survived by his father Michael Gene McCoy Jr and wife Tara and mother Julie Ann Prier-Finley and husband Travis, brothers Michael and Matthew, and sister Megan. Grandparents: Debra and Rodney Chisum, Michael and Dianne McCoy, LeAnn Martin, Irene Finley, Larry and Anne Cutberth, and Bessie Thomas. A visitation will be held on Friday December 12, 2014 at 1:00 pm. The funeral will start at 2:00 pm, with burial to follow at Greenlawn Memorial Gardens. Memorial contributions may be made to the No Kill Shelter C.A.R.E. Services have been entrusted to Greenlawn Funeral Home North, Springfield, MO. Online condolences may be made at www.greenlawnfuneralhome.com.