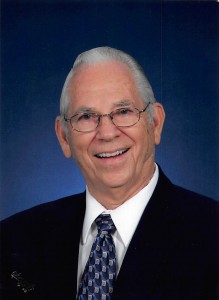 Jim was born on April 10, 1932 in Pierce City, Missouri and went to meet his Lord and Savior on June 29, 2016 due to an untimely accident. He was welcomed into the arms of family and friends who have preceded him in death. Elizabeth Young, his wife of 53 years, his parents Joe and Mills Young, brothers Jay Pressley, Don Young, Leroy Young, and sisters Ida May Hilker, Norma Jean Dacy, Nancy Jane Young, Barbara Reno and son-in-law Terry Clifton. He is survived by his children Debbie Young-Clifton, Kathy Barnett, James Young and wife Sherry, four grandchildren Alex Young, Kate Kissee and husband Brice, Kelsey Barnett, and Derek Young and close friend Judy Jantz. He is survived by brothers Carl Young and Glen Young and sisters Marion Knight, Sue Hawkins and Kay Dacy. Jim graduated Pierce City High School in 1951 and served in the United States Navy during the Korean War from 1951-1955. After working at various jobs in Missouri and Washington, Jim began his professional career at Bus Andrew Truck Equipment in Springfield, Missouri in 1958. He became the owner and president in 1972 and continued working until his retirement in 2002. He was very active at Northwest Baptist Church where he served as chairman of the deacons for over 30 years. Jim was appointed to the Springfield Planning and Zoning Commission for 8 years and was an avid Drury Panther and Lady Panther basketball booster. In later years he became a St. Louis Cardinal fan. Jim was a loving and caring soul and will be missed by those fortunate enough to know him. Visitation will be at Greenlawn North Funeral Home from 6:00 to 8:00 P.M. Tuesday July 5th. Services will be held Wednesday July 6th at 10:00 A.M. at Greenlawn North Funeral Home. In lieu of flowers please make your donations to Ozarks Food Harvest in Springfield, Missouri.