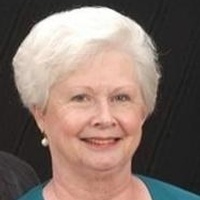 Jo Ann married Norman Sewell on November 13, 1960 and they enjoyed more than 58 years together.

She was preceded in death by her parents, Blaine and Gail Apperson and one sister, Teresa Gail.

Jo Ann was a member of the Capps Road Church of Christ in Harrison. Though she worked at various jobs as the need arose, her passions were painting and her flowers. She will be missed sorely by her family, her spiritual family and her many friends and fellow painters.

In lieu of flowers, contributions may be made in her name to the Juvenile Diabetes Association at www.jdrf.org.

Services in Harrison, Arkansas will be held at 10:00 AM, Saturday, March 16, at Coffman Funeral Home Chapel with Mr. Keith Sharp officiating. Visitation will be held one hour prior beginning at 9:00 AM at the funeral home.

Graveside services in Springfield, Missouri will be held at 3:30 PM, Saturday, March 16 at Greenlawn Cemetery with visitation held one hour prior beginning at 2:30 PM at Greenlawn North Funeral Home, 3506 North National.

Local arrangements under the direction of Coffman Funeral Home of Harrison. On-line condolences may be left at www.coffmanfh.com.