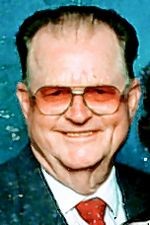 Joe Combs
The Rev. Joe Combs went to be with the Lord on August 15, 2009, in St. John’s Medical Center. He was born April 10, 1921, in Rover, Mo., to Jacob and Cora Elben Combs, and was one of 10 children. Surviving siblings are Loyd Combs of Joplin, Mo., Belva Holton of Carl Junction, Mo., and Jean Goodman of Liberty, Mo. Preceding him in death were his parents; brothers, Rohl, Boyce and Tate; sisters, Dema Daugherty, Wilma Ottman and Nola Pfitzner; and one great-great-grandchild, Sean. Rev. Combs is also survived by his wife, Ada (Lockard) of Springfield, Mo.; children, Philip and wife, Marydell of Springfield, Mo., Bonita Story and husband, Clinton of Mercedes, Texas; Lois Mayes and husband, Frank of Springfield, Mo., Gloria Jenney and husband, Tim of Winter Haven, Fla., and Esther Novak and husband, Bob of Philadelphia, Pa.; 12 grandchildren; 16 great-grandchildren; and one great-great-grandchild. He served in the Coast Guard during World War II and was honorably discharged after dutifully serving his country for three years, three months and 19 days. Joe and three of his brothers proudly served their country during wartime in various branches of the armed forces. Joe and Ada were married in Bolivar, Mo., on June 4, 1946. They immediately began their ministry together as Assemblies of God ministers and pastored churches in southern Missouri, Kentucky and New Mexico. They also did missionary work in Samoa, Marshall Islands, and short trips to Haiti, Belize, Taiwan and Africa. He preached revivals and helped start churches in many states. During their ministry, many people came to the Lord and many were called into ministry. Joe retired from his last pastorate in Houston, Mo., in 2001, and shortly afterward moved to Springfield. In every place Joe and Ada pastored, they either built a church, parsonage, educational facility or some other kind of capital improvement. Hard work, sacrifice and unwavering commitment characterized their ministry. We remember Joe by the churches he planted and built, the encouragement he gave to others, determination during tough times, humor and joking, and his soft heart and desire to be close to God. Visitation will be Tuesday, August 18, 2009, from 6 to 8 p.m., in Greenlawn Funeral Home North. Celebration of life service will be Wednesday, August 19, 2009, at 10 a.m., in the funeral home, with burial and graveside service in Pine Lawn Cemetery, Houston, Mo. In lieu of flowers, the family requests memorable donations be sent to House of Compassion – Missions in Haiti, PO Box 2996, Claremore, OK 74018 or website www.missionsinhaiti.com.