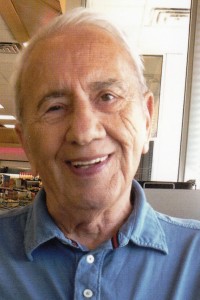 Joe D. McMillian 77, Springfield, passed away Nov. 29, 2014 in Mercy Hospital after a long illness. He was a life-long Springfield resident. He was born October 24, 1937 to Evah and Otto McMillian, who preceded him in death. Joe retired after 43 years in the military, serving 4 years of active duty in the United States Air-Force, and 39 years in the Missouri Army National Guard, retiring as a Chief Warrant Officer 4. During those 39 years, he also served as a Federal Civil Servant, retiring as the aircraft mechanic general foreman, of the 1107th AVCRAD. He was an avid fisherman, Cardinal baseball fan and enjoyed bowling and spending time with the people he loved.
Joe was preceded in death by his parents, his brother Robert McMillian, his sister Idonna Dodson, and niece Debbie Lindsey. He is survived by his wife, sisters: Shirley Lindsey and her husband Bob, and Pauline Eddington and her husband Bob, brother-in-laws: Jerry Dodson, Jim and Jan Lavern, John and Margaret O’Niel, and Jopseph Lavern, and many nieces and nephews.
Funeral Services will be Thursday, Dec. 4, 2014 at 12:30 p.m. in Greenlawn Funeral Home East , with burial to follow at Missouri Veteran’s Cemetery. Visitation will be Wednesday 6 to 8 p.m. in the funeral home. The family requests, in lieu of flowers memorial donations be made to St.Jude’s Children’s Hospital.