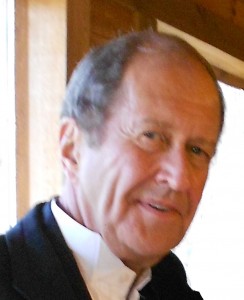 John Franklin Creson, known by some as simply “John C.”, passed away unexpectedly on Monday, October 12, 2015. Born December 30, 1947, in Springfield, Mo., to the late John James Creson and Eleanor Hoff Creson, and united in marriage to Susan Marie (Mills) Creson on May 29, 1976 in Springfield.
John was preceded in death by his father, John J., and his mother, Eleanor. He is survived by his daughter, Megan Nicole Creson Million, son-in-law, A.J. Million, former wife, Susan, “second” daughter Emily J. Million, stepmother, Betty Ann Creson, sister, Evon Eleanor Creson, niece, Taylor Shaw-Hamp, and niece, Laura Ashley Shaw, as well as by many close friends.
John was a 1965 graduate of Parkview High School. He also graduated from Central Methodist University in 1970 with a Bachelor of Science in Biology and Chemistry, and University of Missouri – Columbia with a Master of Science in Public Health. John served as a pharmaceutical sale representative and then eventually regional manager for USV Laboratories, Division of Revlon. At USV Labs, John received many awards, including Salesman of the Year from 1972 to 1979. After leaving USV Labs, John and Susan moved back to Springfield and jointly started Double Q Printers from 1979 to the sale of the business in 2000. During that time, John landed large accounts with AMI, Upjohn, Tracker Marine, and Branson Theatres, among others. Following the sale of Double Q, John pursued other sales jobs in the Springfield and Branson areas.
One of the most animated people you could know, John loved acting, singing, hunting, lifting weights, cooking, walking on nature trails, traveling, and spending time with his daughter, Megan, and son-in-law, AJ. John was incredibly outgoing and known to light up a room just by entering it. People often commented on how thoughtful and kind he was, as well as how big of a heart he had. Many loved him, his daughter adored him, and he will forever be missed.
A Rosary in honor of John will begin at 5 p.m. on Friday, October 16, with visitation to follow from 6 to 8 p.m., in Greenlawn Funeral Home South. The service will take place on Saturday, October 17, at 11 a.m., also in Greenlawn Funeral Home South.
In lieu of flowers, the family requests thoughts and prayers that John is at peace.