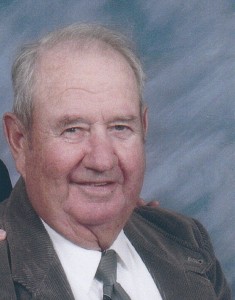 John Hargus, 87, of Brighton, Mo., went to his heavenly home on Friday, January 23, 2015. He was born on July 26, 1927 in Webster County to John William Hargus and Janie (Wiles) Hargus. He married Juanita Johnson on February 15, 1947.
John was preceded in death by his parents, one infant brother, and five sisters.
He is survived by his loving wife of 67 years. Juanita Hargus, sons: Larry Hargus, Gene (Sandy) Hargus, and James ( Karen) Hargus, daughters: Kay (Dan) Hayter, LaDonna (Darrell) Shirey, fourteen grandchildren, twenty-two great-grandchildren, five great-great-grandchildren.
Visitation will be Sunday, January 25, 2015 from 6 pm- 8 pm at Greenlawn Funeral Home North Chapel.
Funeral Services will be Monday, January 26, 2015 at 11 am at Noble Hill Baptist Church with burial to follow at White Chapel.
Memorial donations can be made to American Heart Association or the Alziemer’s Association.