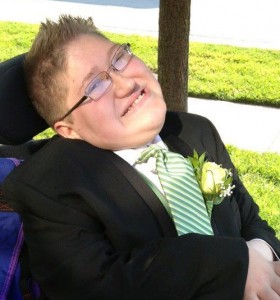 John Lake Horner age 20, of Springfield, Missouri, passed into glory to be with his Lord on Saturday, July 25, 2015 at his residence, Harvard House of Springfield.
John Lake was born in 1995, in Arlington, Texas, to Amy Louise Horner and John Horner. He came to Missouri at two months old with his mother Amy and lived with his grandparents Jerry and Marty Payton. John Lake lived most of his life in Springfield with his mother and stepfather Shane Cloud. John Lake went to live at the Harvard House Group Home for the Disabled in June, 2013.
John Lake graduated from Kickapoo High School in 2014, and was a member of James River Church. He also attended Camp Barnabas for many years, a Christian summer camp for kids with life-threatening illnesses and disabilities.
To cherish fond memories of his life, John leaves his maternal grandparents, Jerry and Patricia Payton; his uncle Stephen Payton; his aunts Shelley Forell, Anne Cowan, and Christy Ghaffari; his paternal grandfather John Horner, Sr.; his godmother Lenette Kujawa; his sister Jordan Cloud; his brother Eli Cloud; his step parents Shane and Nicole Cloud; his step grandparents, Danny and Judy Cloud; many cousins; and a host of other relatives, dear friends, nurses and caregivers.
John’s passing was preceded by his infant sister Keilah Louise Horner, his mother Amy Louise Payton, his maternal grandmother Martha Louise Payton; his paternal grandmother Judy Horner, and his godfather Tom Kujawa.
A memorial service to celebrate John’s home going will be held at the James River Church Chapel in Ozark, Missouri, on Saturday, August 15 at 3:30 p.m. He will be laid to rest immediately following his memorial at Manley Cemetery in Battlefield, Missouri.
In lieu of flowers, a donation to Camp Barnabas in loving memory of John may be made at campbarnabas.org/donate