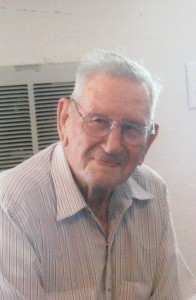 John Richard Poyner, 92, of Hermitage, Missouri was born January 31, 1924, in Springfield, Missouri and passed away March 3, 2016. He was preceded in death by his father, John Poyner, sister Delpha May Poyner, sister, Sarah Beatrice Inman, brother, James David Poyner and his wife, Jo Poyner. He is survived by his life partner, Janann Miller, his sister Ada Lee Underhill, his niece, G. Gailene Kaufman and nephews, Larry A and Dennis W. Underhill. He had not been blessed with children, but was a devoted uncle to his nieces and nephews and their families.
He was a veteran of World War II in Central Europe. He achieved the rank of sergeant. His decorations included the American Theater Ribbon, the European African Middle Eastern Theater Ribbon with Bronze Star, Victory Medal, as well as the Good Conduct Medal with two Overseas Bars. He was released from active service April 2, 1946.
He was retired from the Hoisting and Portable Engineer Union in Kansas City and Operating Engineers Local 101 in Sedalia approximately February 1986.
He was an avid horseman and lifetime member of the Missouri Fox Trotting Horse Breed Association, Incorporated. His horses won numerous awards, one of which was the Missouri Grand Champion.
John was a life member of the Lincoln, Missouri, VFW.
John played guitar and sang in the Moonshiners Country Western Band at numerous functions and activities. He also played in numerous nursing homes throughout the Hermitage area.
John was a staunch supporter of the Democratic Committee and a firm believer in Union membership.
Visitation will be held Monday March 7, 2016 from 12:00 – 1:00 PM at Greenlawn Funeral Home North 3506 N. National Ave Springfield, MO. Funeral service will be Monday at 1:00 PM at the funeral home. Burial will follow at Danforth Cemetery, located approximately one half mile north of East Division St/Highway YY on Farm Road 213. In lieu of flowers donations may be made to Transitions Hospice, 351 S. Mains Ave, Bolivar, MO 65613 or in care of Greenlawn Funeral Home.