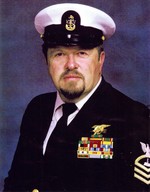 Mr. John Stanton “Buck” Buckmaster, age 78 of Fair Play, MO, passed away Friday, August 21, 2009, in his home. He was born November 12, 1930, in Marquette, MI, to Lloyd and Edna (Halvorsen) Buckmaster. He was a US Navy Seal in the Korean conflict, a SEABEE in Viet Nam, and retired as a SEABEE in October 1984. He is a member of the V.F.W. Post #2439 of Marquette, MI, and American Legion Post #138 of Bolivar, MO.
His parents; a daughter Kelly Rae Buckmaster; two sons: infant John Stanton Buckmaster, and Jon Marcus Buckmaster; two sisters: Holly Beaudry, and Lola Tauch; four brothers: Lawrence “Butch” Buckmaster, Stan Buckmaster, Richard “Dickie” Buckmaster, and an infant John Buckmaster precede him in death.
He is survived by a son James Buckmaster of Fair Play, MO; two daughters: Karen Forsythe of Gulfport, MS, and Margaret Young of Bolivar, MO; a brother Lloyd “Bucky” L. Buckmaster of Marquette, MI; three sisters: Alice Buckmaster of Marquette, MI, Kathleen “Kitty” Kelly of Phoenix, AZ, and Sonja Steinglein of Au Train, MI; 13 grandchildren and nine great grandchildren; as well as many other family and friends.
According to John’s wishes his body will be cremated. A memorial service will be held at the Harvest Assembly of God Church in Fair Play Thursday, August 27, 2009, at 6:00 PM with Pastor Lyle Shaulis officiating. Friends and family may sign a guest book or send private condolences at: www.greenlawnfuneralhome.com. Arrangements have been entrusted to Pitts Chapel of Greenlawn Funeral Homes Bolivar,