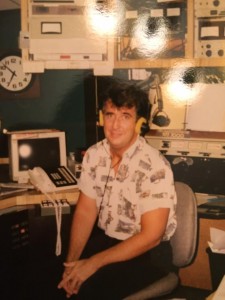 “Your father is John Stephens? The John Stephens?”
My husband’s uncle had been a fan. He approached my father as others might have John Lennon or Elvis Presley, shaking and star struck. The year was 2012, and John Stephens had been off the air for years, a casualty of evolving radio formats. Dad was surprised someone remembered him, but how could they not? People just don’t forget John Stephens.
John Stephens was born John Stephens Burk on February 26, 1952 to John and Mary Burk in Gary, Indiana. An only child, he was known by friends and family as “Steve” throughout his early life, happily spent in Crown Point, Indiana. He was also a certified Son of the American Revolution, something of deep importance to his father.
As the child of John Stephens, it’s difficult to reconcile his two incarnations. To his kids and those who knew him best, he was always goofy and big-hearted. He was also a natural showman, which made his vocation of choice the perfect fit. But when people talk about Dad, they are quick to mention his disarming shyness and reserve—the version of him that lived off-air and came out when he wasn’t familiar with those he was around. Still, he had a way of putting all that aside when there was a spotlight to be seized. As early as his high school years, Dad was in the business of wowing. When legendary jazz saxophonist Arnie Lawrence visited his high school, John Stephens emerged to show off his mad talent at the drums, flipping his drum sticks and channeling his drumming hero, Buddy Rich. The school recognized his talent for the first time, and Dad was instantly cool.
Dad excelled at broadcasting school and spent his early career in Indiana and Illinois, both working in radio and showing off behind the drums. It wasn’t until his uncle, Samuel Burk, owner of the Community Broadcasters, Inc, contacted Curt Brown in Springfield, Missouri that John Stephens came to Springfield and established a name for himself at KTTS. He temporarily moved to Kansas City for another radio job, but Springfield was in his blood by then, and the move didn’t last. In 1980, Dad returned home and took a job at the now-gone KICK Radio. He performed the middays at KICK, including his favorite hour of the day—Oldies from noon to 1. His Springfield listeners will remember him as a local voice of country music, but Dad’s passion was always golden oldies, particularly Three Dog Night and The Beatles.
It wasn’t long before John Stephens returned to KTTS, first in the evening shift but eventually making his way back to the morning drive on KTTS-AM.
Dad’s signature style was largely inspired by his radio hero, Larry Lujack, a Top 40 DJ at WLS in Chicago. During a mid-1980s visit to WLS, Dad was among the station visitors who were invited to join Lujack on the air. Dad seized the opportunity, and his natural charisma earned praise from Lujack, who told him he should have his own career in radio. This, of course, started a brief on-air conversation about Dad’s career as John Stephens of KTTS in Springfield, Missouri. To have gotten to meet his hero and have that hero recognize his talent was, to Dad, the stuff of dreams.
Arbitron ratings confirmed what everyone who remembers John Stephens already knows—he had a strong following, and he was quite popular with the ladies. In 1983, John Stephens’ talent as writer/producer earned KTTS first place honors at Missouri Broadcasters Association, and recognition in 1988 at District Addy Awards. In 1990, Dad was honored with a nomination from the National Association of Broadcasters for the prestigious Marconi Radio Award. He was one of only five nominees across the nation.
John Stephens dominated the airwaves of the Greater Springfield area until the late 1990s. He was what locals would call a “shock jock”, often saying things not for the faint of heart, laughing at his own irreverence. His sense of humor had a modest range, from the crude to the downright silly. If he wasn’t wowing you with his witty observations, he’d surely get you to crack a grin by making a face. For Dad, life was better lived while laughing. Getting him to take anything seriously often required herculean effort, but his ability to find joy in the little things was what made the struggle he faced in 2015 bearable—for him, his wife, his children, and the multitudes of friends and family who fought alongside him. Not once throughout his illness did he stop laughing, especially at himself.
Among other things, Dad was known for his undying loyalty to the Cubbies. He ate, drank, and breathed all things Chicago. Friendly rivalry was welcome, especially with his family and friends, who would often visit him wearing the Cardinal red of the enemy. But it was all in good fun, and Dad was always prepared, decked out head-to-toe in Cubbie blue. He also had a penchant for quoting the things he loved, ensuring that visits included words of wisdom from philosophers Rodney Dangerfield and George Carlin.
John Stephens Burk succumbed to lymphoma on January 2, 2016, and passed away peacefully in his sleep at Cox South Hospital with his wife, Kimberly Ann Highbarger-Burk, at his side. John is survived by his wife Kimberly, his four children—Kelly Anne Weatherford, Holly Denise Atkinson, Stephen Loren Burk, and Jodi Lea Burk—and three grandchildren—Taylor Weatherford, Colby Weatherford, and Samuel Burk. The visitation will be held at East Grand Church of Christ on Thursday, January 7 from 5pm – 7pm; the memorial service will be Friday, January 8 at 10am. In accordance with his wishes, he will be cremated. Also in accordance with his wishes, his children will do their best to lay him to final rest at Wrigley Field, where we know he will be the happiest.
In lieu of flowers, the family requests donations to the Fair Haven Children’s Home.
As Dad would say, “Be good to yourself and to somebody else.”