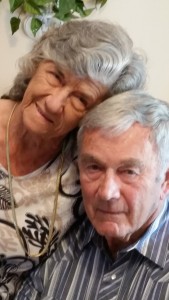 John Thomas Strine was born July 6, 1925 in Milton Pennsylvania to Lester Leland Strine and Mary Helen (Richardson) Strine. He passed away on August 17, 2015 at 11:09 A.M. in Ozark, Missouri. He was one of three sons which have all preceded him in death.
On July 20, 1943 at the age of 18, John enlisted in the United States Army Air Corp and was a radio operator on a B-17 flying 25 missions over Germany. On November 16, 1945 John was discharged due to the ending of the war.
On October 5, 1948 John re-enlisted in the Korean conflict, also as a radio operator on a B-29 flying 24 successful missions over Korea. On October 23, 1951 on his 25th mission, their plane was shot down over China. Only 6 of the 13 crew members survived only to be taken prisoner by the Koreans and Chinese. John was taken by the Chinese, where he was a prisoner of war for 22 months, being released after the truce was signed between China and the United States.
John married Ladema (Gray) Strine and remained in the military, as they lived in England for 4 years. Having no children of their own they adopted a 2 month old German baby boy, Roy Andrew Strine.
June 30, 1966, John was discharged from the military after 20 years. They lived in Washington State, where he was an active member of the Church of Christ serving as a deacon for several years. He also drove a gas truck for the next 20 years retiring from the Teamsters.
Eventually, John and Ladema moved to Yuma Arizona making their home there and after 49 years of marriage Ladema passed away on May 19, 2004.In February, 2005 John met and later married Ruby Charlene Harp of Nixa, on May 21, 2005, spending 3 winters in Yuma together. In February 2007 John moved to Nixa permanently where he has resided ever since.
John is survived by his wife Ruby Charlene Strine of 10 years, his son Roy Andrew Strine of Washington State, stepson, Mike and his wife Vickie Morgan of Wichita, KS, nephew, George Strine and wife Annette of Shippensburg, Pennsylvania, nephew Jim Strine and wife Mary Jean of Edgewood, Kentucky, step-children, Michael and Anna Osborne of Iowa, Beverly and David Wilson of Crane, MO, Jeff and Charlotte Akins of Crane, MO Bruce Harp of Nixa, MO, and a host of step-grandchildren and great-grandchildren, his church family from Union Hill Church of Christ in Nixa and many friends.
John was a wonderful Christian man, a wonderful husband and friend. He loved his country and served his country well. He will be greatly missed.
Graveside services will be on Saturday, August 29, 2015 at 2:00 p.m. in Jamesville Cemetery, in Stone County, Missouri with full military honors. In lieu of flowers, the family requests donations be made to Fairhaven Children’s Home or donor’s choice. Services have been entrusted in Greenlawn Funeral Home South.