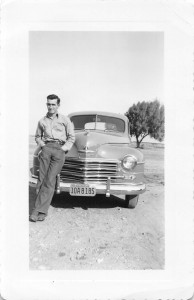 Johnie Roscoe Hamilton (JR) age 89, of Springfield MO, passed away on Friday, March 11, 2016 at Glendale Gardens, quietly among his family. He had fought a 35-year battle with Parkinson’s. He was born on the 13th of January 1927 in Braggs Oklahoma, the second son of Johnie Roscoe and Ottie (Campbell) Hamilton.
After completing high school in Snowball AK he entered the army serving in 1945 with the 398th Division. He spent 13 months in Osaka Japan helping reestablishing communication links .
After being honorably discharged he returned to Marshall AK where he was united in marriage to Donna Rae Duncan. They moved to California where they were blessed by the birth of their two children, Ronnie Christopher and Patricia Ann Hamilton. Years later after the loss of their daughter Patricia they became foster parents, eventually adopted a son, Stephen Douglas Hamilton.
After returning to Missouri in 1955 he went to work for Springfield Tablet and later Greyhound Bus Lines from which he had to retire due to developing Parkinson’s.
He attended Kansas Expressway Church of Christ acting as a deacon and later as an Elder until he was unable to continue due to his Parkinson. For many years he was in charge of their bible school program. Upon retiring to remain active he developed a love of bowling, going several times a week as member of several teams.
He was preceded in death by his parents; Donna his wife; his daughter Patricia; his son Stephen; and his brother Leo.
He is survived by his sister Willie Pruitt; his son Ronnie and wife Susan; his grandsons Chris and wife Tonya, Seth and wife Amy and grandson Checotah Hamilton. Also, grandchildren Kailyn, Rylan, Zachary, and Alexis. Along with loved brothers and sisters-in-law.
A visitation will be from 10 to 11 a.m., with the funeral service to begin at 11:00 a.m. on Tuesday, March 15, 2016 in Greenlawn East Funeral Home, Springfield. Burial will be at Greenlawn Memorial Gardens, Springfield. Donation can be made to Fair Haven Children’s Home, Strafford MO.