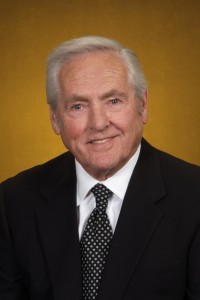 Joseph Byron Rogers (Joe) of Springfield, MO peacefully passed away surrounded by his family on Tue, Jan 5, 2016 after a long battle with cancer.
Joe was born in Springfield, MO on Feb 24, 1938, son of Harry and Mildred Rogers. Joe is survived by Martha J. Rogers, his wife of 53 years and their son Joseph Jeffrey Rogers (Jody) of Houston, TX.
He is preceded in death by his parents, sister Linda Umphries, and brother Harry Kay Rogers. Joe is survived by his sister in law Bonnie Jo Rogers and her family, along with brother in law Robert L Umphries and his family.
Joe will be remembered for his hard work ethic and great sense of humor. He was a man of faith in Jesus Christ and we find comfort in knowing he is with his maker.
He graduated from Central High School class of 1956 and in recent years helped organize reunions, including a men’s luncheon held each month. Joe also briefly attended Southwest Missouri State University and also served in the United States Naval Reserves, until the passing of his father when he then took on business responsibilities.
Joe met Martha Jane Riley in 1961 and it was love at first sight. They dated for a year and married on Apr 7, 1962.
Joe owned and operated Rogers Auto Salvage, Inc. on West Kearney Street in Springfield. Joe’s love of the automotive industry was evident from a young age as he admired the engineering, craftsmanship, and art of car making. Their salvage yard was one of a few featured in the 1985 Smithsonian Magazine article entitled “The joy of junk”.
Joe was an active and contributing member of High Street Baptist Church where his parents were charter members. Later he found community at Seminole Baptist Temple as a member of the Faith Bible Class where he had many friends. He was also a supporter of BBF Builders who build and repair churches.
He loved the outdoors and enjoyed bicycling with friends. He also took pride in manicuring his lawn and garden, and visiting with his many wonderful neighbors, including Cal Wise. In his neighborhood he was a charter member of the Lakeside Troopers.
Joe loved going to the beaches and his son often likened him to actor George Hamilton due to his ability to maintain a tan year round. His favorite places included Destin, FL in spring and fall, and South Beach, FL in winter.
At the turn of the century Joe met and connected with a group of men at the Pat Jones YMCA. His morning routine included a brief workout and then coffee with his friends. He was a charter member of their Coffee Club. His family is grateful for everyone at the YMCA for being there for him.
Visitation will be held Sat, Jan 9th at 11:00am at Seminole Baptist Temple (corner of National and Republic Road) with a service immediately following at Noon.
Memorial contributions can be made to either Seminole Baptist Temple or BBF Builders c/o Seminole Baptist Temple, 4221 S National Ave, Springfield, MO 65810 or online at seminolebaptist.org
Services are under the care of Greenlawn Funeral Home East.