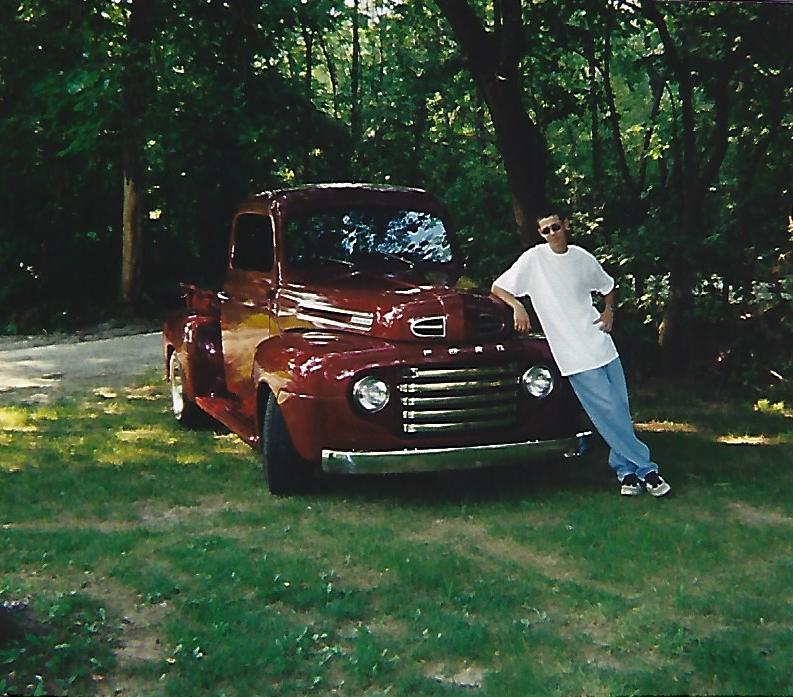 Joshua Adam Hill, son of Danny Ray & Connie Sue Ellison Hill was born Monday, August 20, 1979. He was born at St. Johns Hospital in Springfield, Missouri. He passed way Saturday, April 20, 2019 near Mt. Judea, Arkansas when he lost control of the motorcycle he was riding and hit a guard rail. Joshua had lived at Bass, Arkansas, for the past 5 years. Joshua is survived by 1 brother, Shawn Hill and 1 nephew Skyler Sixx Hill of Springfield. Joshua, was engaged to Babe Anderson, his sweetheart of nearly 8 years, also of Bass, Arkansas. They were to be married 2-20-2020 (how awesome was that?) Also, Babe’s son Marcus was his dear friend and Chelsey & Emery, Babe’s daughter and grandson were special to him as well. Joshua is survived on his mother’s side of the family, by his 85 year old Grandmother “Ma” Barbara Jean Mitchell Ellison, Aunt Diana and Uncle Mike Comstock and cousin Travis and his wife Ms. Charlie Comstock, all of Springfield. His Aunt Carol known as Nana, and Uncle Kerry Gardner of Nixa, his cousin, Beth Reser Foster of North Carolina and Uncle Tim Reser of Springfield. Josh is also survived by his Aunt Carrie Merritt of Springfield, Uncle Carl Hill of Florida on his dad’s side of the family and many other cousins on both sides and a host of friends and fellow employees of Brower Electric where he worked as a licensed electrician for 10 years. Joshua was proceeded in death by his beloved “Pa” Howard Ellison, and his paternal grandparents Melvin and Anna Lee Hill, 3 uncles, John, Ralph and Arthur Hill.

Joshua lived with his parents and brother, Shawn, who was 6 years older, in the very secluded country near Fordland, from his birth in 1979, until moving to Springfield, in 1993. He loved the country and all the freedom it offered, a little boy to roam in the woods and build awesome forts, catch frogs, sled in the winter and just have good clean fun with his brother and dog Rusty! He attended Logan Rogersville Elementary School and Rogersville Middle School. After moving to Springfield, he attended a small private school and then Christian Schools of Springfield from 9th through 11th grades and received his GED 5 months before senior graduation. Josh was in the Cub and Boy Scouts, played little league baseball and ran track. Joshua began attending the Fordland Free Will Baptist Church several months before he was born and showed up at church in person at 8 days old. He was very active in the children and youth programs there. At 6 years old, he and Hollie Kensinger were the first to be baptized in the new indoor baptistery. Brother Nathan Ruble did the honor. After moving to Springfield, Joshua was active in the youth group at Grant Avenue Free Will Baptist Church where Gordon Edwards was youth leader and David Huett was pastor. In his mid-teens his desire was to someday be the camp director at the Niangua Free Will Baptist Youth Camp and at one time felt he had been called to preach. As he got older, he drifted out of church. He was a wonderful young man who was kind and good to others. Josh, RJ and Mark owned Eclipse Electric for about 5 years and did some of the renovating on the square in Ozark, MO. He always worked along beside others and never asked anyone to do anything he wouldn’t do himself. He loved working on his ‘48 Ford pickup and his ‘72 Ford Mustang convertible and sometimes went to Cruise-Ins. Josh had 2 old cats, a brother and sister Zephyr and Cruella they were just tiny kittens when he got them. The cats loved Josh and used to wait at the window for him when they heard his truck coming. They seemed to have something against Babe, when Josh would turn his back, the cats would pee on her shoe and purposely do bad things to the comforter on her bed. Josh was once sick, but refused to spend money to go to the doctor, but sent Babe to the vet with them and paid $300 to treat them! Josh was one tough dude, he had a real bad toothache for several days and it kept getting worse. Dan and I volunteered to loan him money to go to a dentist, but he wouldn’t take the loan. One morning at work the pain was unbearable, Josh went to his tool box and got his needle nose pliers, sterilized them with rubbing alcohol, went into the bathroom and pulled his tooth, rinsed his mouth with peroxide and went back to work! He was always building something, he and Babe were in the process of remodeling her home and sometimes it was suggested he was a little too picky, otherwise a perfectionist. He always felt it was better to repair anything that was broken instead of giving someone else his hard earned money to fix it! He and his Dad always loved working together fixing things that were broken, on occasion they may have made it worse! Their newest project was to build a rock wall around Babe’s house and the completion of his machine shed. His last day was spent with Babe building a veggie garden with railroad ties that Dan and I delivered just this past Wednesday. Babe said it was a wonderful happy day. They spent the morning hours going to town to get garden soil and working on the tie beds. She commented to Joshua, “Do you think you might be a little too picky? It’s just railroad ties in the garden!” Josh gave her his big ole smile and she looked at him and said “I sure love you”, again the big ole smile, he asked, “Why?” Babe said, “Just because I can”. He said he thought he would take the motorcycle for a little ride. A few minutes later, and just a few miles from home he drove into the arms of Jesus. The planned wedding vows never to be spoken, never to finish the garden or the house remodel, never to share another shade tree picnic with Babe and our family, never another Mother’s Day, or 40th birthday party, no more 4th of July fireworks, Thanksgiving and Christmas dinner followed by a nap, no special dinners at a little place called Mexican Villa, never feeding his chickens and sharing eggs with all of us. He will be resting near his “Pa” in the Bethel Cemetery until the trumpet sounds and we meet our Precious Jesus in the clouds. As Christians, we have the promise of living together in Heaven someday. The days will be sad and the nights will be long and sleepless with the unanswered question, “Why?” The memories sweet, but bitter at the same time. Joshua would tell you if he could, always tell the ones you love that you do, give them a hug, truly take time to smell the beautiful lilacs, lilies and roses, truly see the redbuds and dogwood trees. Tell those you love to be ready to meet Jesus every day, in case this is your appointed time. The years are swift and gone too soon, live them wisely. I love you my sweet baby boy, MaMa.
Visitation will be held Wednesday, April 24, 2019 at 11:00 a.m. in Greenlawn Funeral Home East with Funeral Service at 12:00 p.m. following the visitation. Burial will be at Bethel Cemetery in Taney County, Missouri