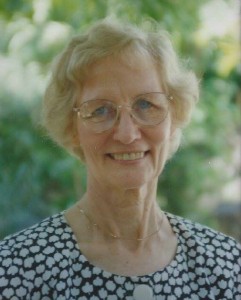 Joyce was born in Trenton, Missouri on November 26, 1930. Her parents were Wilbur and Beulah (Stottlemyre) Chandler. Joyce has two sisters, Joan Offield and Donna Chandler. Joyce graduated from Trenton High School in 1948. She met her future husband, Gail Collins Copple, when he returned to Trenton from service in the Navy during World War II. Both Gail and Joyce attended the Trenton Assembly of God church and North Central Bible College in Minneapolis, Minnesota. They were married at the Trenton Assembly of God church, on August 27, 1949.
Joyce and her husband were both credentialed ministers with the Assemblies of God and served as Pastors of Assemblies of God churches in Kemmerer, Wyoming; Baldwin Park, California; Orrick, Breckenridge, and Poplar Bluff, Missouri; and Tucson, Arizona. Joyce’s husband died in 1988.
Joyce’s life overseas began in 1992 when she went to serve in Cambodia with the Assemblies of God as a Missionary Associate with the duties of bookkeeping and teacher with the Assemblies of God and various schools in Phnom Penh. There she worked alongside her good friend, Ann Greve, who now serves as Pastor of the International Christian Assembly in Phnom Penh. They ministered together in a wide variety of situations, using their gifts and talents to help build His Kingdom in Cambodia. Joyce spoke in churches and taught in the Bible school andused her skill in bookkeeping to train many Cambodian bookkeepers during her years in the country.
She was “Grandmother Copple” to a number of Cambodians and expatriates in Cambodia. On one occasion, a six year old girl came into the office at the International School of Phnom Penh and asked to see Grandmother Copple. The receptionist explained Joyce was working and asked what she needed. The little one said, “I just need to see Grandmother Copple.” So she brought her to Joyce and explained her request. Joyce pulled a chair up next to the little girl and asked if she needed to talk. The little girl replied, “I just need to be with you, Grandmother Copple, for a while.” She sat quietly for about a half hour then sighed contentedly and said, “I am OK now, Grandmother Copple, I will go back to class.” Joyce hugged her and away she went.
Joyce also was a teacher at the Cambodia Bible Institute. The Cambodian students, preparing to be pastors, loved to ask Joyce many questions about her ministry experiences through the years, and especially liked to sing with Joyce. When class would finish in prayer by one of the students, the student’s prayer would often be, “O Lord, thank you for Teacher Joyce, and for her strong spirit and her strong voice when she sings!”
Joyce retired and became a resident at Maranatha Village in July, 2009.
Joyce has two sons, Steve and Joel Copple. Steve and his wife, Pat, serve in Vietnam as missionaries with Act Beyond. Steve also serves as the Vietnam director for Samaritan’s Purse. Joel and his wife, Ali, live and serve in Cambodia. Joel is the area director for the mission agency Partners International in the Mekong Southeast Asia, and Ali is an educational consultant.
Joyce has five grandchildren and one great-granddaughter. Joyce had the privilege of baptizing all five grandchildren in the ocean in Thailand on the first day of year 2000!
Of Joyce’s grandchildren who grew up in Vietnam, Gideon Copple lives with his wife, Melanie, in New York City. Schuyler Copple Klock lives with husband, David, and is a caseworker for Arapahoe County Department of Human Services, and Emily Joyce Copple is a registered nurse currently studying infectious disease in London. These are the children of Steve and Pat Copple.
Of Joyce’s grandchildren who grew up in Cambodia, Abigail Copple is a teacher in Gig Harbor, Washington. Josiah Copple and Nikki Sanstad are the parents of Joyce’s great-granddaughter Kaiya. Josiah works at The Lodge at Mallard’s Landing in Gig Harbor. Abi and Josiah are the children of Joel and Ali Copple.
Visitation will be Friday, December 5, 2014 from 6:00 – 8:00 pm at Maranatha Village Chapel, and Saturday Dec. 6 from 9:00 – 10:00 am, with a Memorial Service starting at 10:00 am. Graveside services will be Sunday, December 7 at 2:00 pm in Rest Haven Cemetery, Trenton, MO.