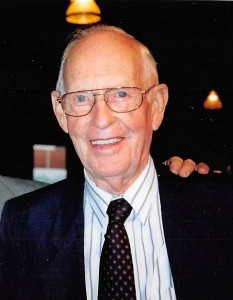 Junior Bond, age 92, passed away Thursday, April 7, 2016, in Springfield, Missouri. Junior was born February 9, 1924, in Morrisville, Missouri, to Charles H. and Lora M. (McKnight) Bond. He grew up on a farm with five siblings, graduating from Marian C. Early High School in 1942. While Junior was a genius at fixing anything mechanical or around the house, he loved engaging with people, whether family, friends, or co-workers.
During World War II, Junior served in the 747th Tank Battalion, driving his Sherman tank onto Omaha Beach early in the morning on June 7, 1944 and then across much of Europe: through The Hedgerows of Normandy, into Paris (as one of the first units to liberate the city), across Belgium, through the Siegfried Line, and into Germany. Junior seldom spoke of the war until late in his life, but he liked to recount crossing the Rhine at night, steering an amphibious tank toward a solitary light on the opposite shore.
Following the war, Junior settled in Springfield, Missouri, and on May 12, 1946, he married Elizabeth Shuler, his high school sweetheart. They had two children, Terry and Debbie. Junior worked as a lineman for the Frisco Railway, and he and Elizabeth took their children to various work locations in Missouri, Kansas, and Alabama. When the children began school, the family permanently settled in Springfield. Not long afterwards, Junior went to work for Welhener Tent and Awning Company. Later in his career, he worked for Bear Auto Trim.
Following retirement, Junior and Elizabeth traveled throughout the U.S. and Canada, often with family and friends. For several years, they were “snowbirds” in Florida. Junior enjoyed people immensely, and throughout their adult lives he and Elizabeth joined close friends for cards on weekend evenings. They especially loved fishing, heading to their place on Pomme de Terre Lake to fish at every opportunity. Junior and Elizabeth were faithful members of Central Christian Church. Perhaps the testament to his character, though, was the many years he cared for Elizabeth, after she suffered a major stroke.
Junior was preceded in death by his parents, Charles and Lora Bond; wife, Elizabeth; sisters Maxine Derossett and Clara Dean Nall; brothers Vernon, Roy, and Wendell Bond. He is survived by: son, Terry (Donna); daughter, Debbie (Mike) Strope; granddaughters, Leigh Strope and Laura Naegele; grandsons, Brandon Strope (Karen) and Ryan Strope (Allison); a family friend, Martha Reed; six great-grandchildren; and numerous nieces and nephews.
Visitation will be held at Greenlawn Funeral Home South in Springfield, 5:30 – 6:30 p.m., Friday, April 8. A graveside service and burial will take place 1:30 p.m., Saturday, April 9, at Pleasant Ridge Cemetery, Aldrich, Missouri.
Junior’s family is profoundly grateful to the staff of Springfield Rehab for their excellent and loving care.