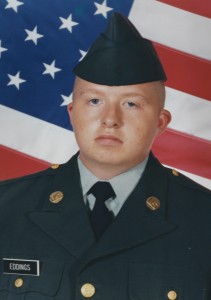 Justin Wayne Eddings, born in Springfield MO April 20th 1984 passed from this life Saturday August 15th 2015, in St. Louis MO. He is survived by his mother and father, Rhonda and Tom Eddings of Republic MO, two sisters one brother-in-law , Ashley Stone of Republic MO, Caci and Jeremy Young of Sparta Mo, one niece, Izabella Eddings of Republic MO his grandmothers, Leatha Wright of Springfield MO, Imagene Eddings of Republic MO, and a host of Aunts, Uncles and cousins. He was preceded in death by his maternal grandfather, Ardell Hinton and his paternal grandfather James Eddings. His grandfathers and the occurrence of 9/11 inspired him to make a difference and he joined the United States Army immediately following graduation in May of 2002. He completed his basic training in Fort Leonard Wood MO after which was stationed in Hawaii where he operated as an engineer. He was deployed to Iraq in 2004 as part of Operation Iraqi Freedom. He served two one year terms as an engineer with the 65th Engineer Battalion in the 25st infantry division. His unit along with many others participated in the US initial advance on Bagdad from Kuwait. For his acts in service he received numerous awards, medals and commendations. After being honorably discharged from active duty he remained in the Army Reserve where he served as a mentor to fellow soldiers until 2009. While he battled constantly with the post war effects in his life Justin never lost his respect for God or his love for family, fun and music. Whether racing dirt bikes, riding fast cars through the streets of Hawaii or talking about long hot nights in the dessert Justin loved to tell of his great adventures. One thing Justin never fell short of was his dreams. Through all of his life’s ups and downs Justin never lost sight of his dreams, his love for people and music. He loved to keep everyone around him laughing and was passionate about his music. You could always find him with headphones on or a guitar in his hand. Justin left us all too soon and his passing has left a huge hole in our hearts that can never be filled or understood. We are left standing here shattered and numbed by his passing trusting only on God’s grace, His Word, His peace and His love. He will be forever loved, forever missed and forever remembered as our hero.
Visitation will be from 6:00 to 8:00 P.M. Wednesday at Greenlawn Funeral Home East. Services will be at 11:00 A.M. Thursday with interment following in Hopewell Cemetery.