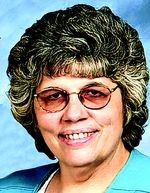 Karen L. Robinson passed away in her home, surrounded by family and friends on June 23, 2009 after a debilitating struggle against ALS. She was a loving wife, mother, grandmother, daughter and friend to many. Karen was born to Leon and Irene Johnson on July 21, 1951 in Springfield. After business college, she joined the Adventures in Missions program and journeyed to Australia where she met her husband Garry Robinson. The couple were married October 30, 1982 and were later blessed with two daughters, Kerry and Lindsey. She worked as the church secretary at Sunset Church of Christ for 22 years where she touched the hearts and souls of many. She was preceded in death by her father, Leon Johnson. Surivivors include her mother, Irene Johnson; husband, Garry Robinson; daughter and son-in-law, Kerry and Jason Chrisman; daughter and grandson, Lindsey and Hayden Robinson; and brother and sister-in-law, Gary and Kayte Johnson. Services for Karen will be held Friday, June 26, 2009, 10 a.m. at Sunset Church of Christ with interment to follow at the Sparta Cemetery. Visitation is Thursday from 6 to 8 p.m. at Greenlawn Funeral Home South. In lieu of flowers, the family requests that donations be made to the ALS Association for research funding in Karen’s name. Donations can be sent to 1721 W. Elfindale, Ste 101, Springfield, MO 65807.